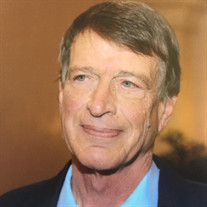 James Patrick McCarthy passed away in his home while watching his beloved Green Bay Packers play on Sunday afternoon October 22, 2017. He was born September 27, 1953 in Milwaukee, Wisconsin. He was then adopted by James and Eleanor McCarthy on February 2, 1954. He married Kelly F. Hatfield on June 6, 2013. Jim loved Science from an early age, especially Chemistry. He received a Bachelor’s degree in Chemistry from the University of Wisconsin in 1977 and a PhD from Pacific Western University in 1992. He holds several pharmaceutical patents. Jim also loved to drive and fly whatever he could get a hold of. After high school, he joined a motorcycle club and, later in life, he joined the Corvette Club of Utah. He earned his Pilot’s license in 1977 and owned his own plane. He served as a member of the Civil Air Patrol and attained the rank of Major. As such, he assisted in the 2002 Winter Olympics. He was also a member of and certified instructor for the NRA. He moved to Sandy, Utah in 2008 to further his career in pharmaceutical research. It was there that he would eventually meet and marry Kelly Hatfield. Jim is survived by his wife Kelly; sisters Nancy, Martha, Brenda, and Sherry and brothers Brian and Allen. He is also survived by his in-laws Gary and Janet Hatfield, and family. He is preceded in death by his parents James and Mary (Eleanor), Birth-Mother Helen, sister Mary Ellen and brothers Philip and Frank. A memorial service will be held Saturday, October 28, 2017 in Wisconsin. A service will also be held in Utah; that time and date are to be determined. We would like to thank his many friends, family, and neighbors who brought richness and meaning to his life, and to those who provided care, including IHC Home Health and Hospice, and Serenity Funeral Home. Please share memories and condolences at www.serenityfhs.com

James Patrick McCarthy passed away in his home while watching his beloved Green Bay Packers play on Sunday afternoon October 22, 2017. He was born September 27, 1953 in Milwaukee, Wisconsin. He was then adopted by James and Eleanor McCarthy... View Obituary & Service Information

The family of James Patrick McCarthy created this Life Tributes page to make it easy to share your memories.

James Patrick McCarthy passed away in his home while watching...