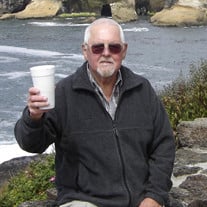 “Phoenix rising from ashes”, a brilliant fledging phoenix rises, renewed and reborn! The Sun rose on January 3, 1937 as James was born to Anne Jackson Lawson and James Walter Lawson, Sr. He was later adopted by Valdemar Douglas Palmer The Sun Set on November 15, 2016 due to heart and lung failure. He has left behind his wife of 41 years, Lynda Kay Stagg Palmer, his two sons Ryan Michael and Darrin Michael, daughter-in-law Shannon, his 5 grandchildren, Austin, Jorden, Hannah, Cheyla, April, and his most loyal pal, his dog, Jackson. He is also survived by his sister Carol Simonson, three nieces, 2 nephews and his extended family David and Bobbie VanWynan. Traveling, being in the outdoors, his boat “The Good Ship Jolly Pop”, fishing the Strawberry Reservoir, his greatest catch a 10-1/2 pound rainbow trout; these were a few of his favorite things. “Those were the days, my love; We thought they’d never end. We’d sing and dance forever and a day; We’d live the life we choose, We’d fight and never lose, those were the days, Oh, yes, those were the days! James was a member of the IBEW Local Union 354 as a Master Electrician for over 60 years. He retired in 1999. He had a deep and loyal dedication toward the Brotherhood. James was a true and talented craftsman, a master of the tools. His two sons and two grandsons carry on his legacy as electricians and dedicated IBEW 354 Union members. Preceded in death by his mother, adoptive father and biological father. He is also preceded in death by his special grandparents; Alfred Bert Jackson and Lillian May Wetzel Jackson, whom he dearly loved. Per Jim’s wishes, he was cremated. Jim has requested no formal services. The family will be holding an informal gathering and celebration of his life on Saturday, November 19, 2016 from 11AM to 3PM at the Bridlewood Villas Club House Located at 9270 South 1898 West, West Jordan, Utah Our “heart” felt appreciation and gratitude go out to Rocky Mountain Hospice, the many doctors and staff at the University of Utah Hospital, especially Dr. Emit Patel, Dr. John Ryan and John Kurt for their Kind care and friendship.

The family of James Walter Palmer created this Life Tributes page to make it easy to share your memories.