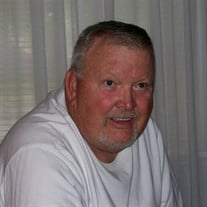 James Harlan Williams April 3, 1943 – August 3, 2016 James Harlan Williams 73, loving husband, father, grandfather, great grandfather, brother, uncle, and friend returned home to his loving Father in Heaven on August 3, 2016 after a courageous fight with throat cancer. He was born on April 3, 1943 in Salt Lake City to John Melvin and Donna Louise (Larsen) Williams; he was the youngest of three sons. Jim married his sweetheart DeeAnn Cutler in Salt Lake City on April 4, 1968, and they were later sealed in the Salt Lake Temple on April 2, 1993. They enjoyed 48 years of marriage. Jim grew up in Salt Lake City where he attended Whittier Elementary, Lincoln Jr. High, and graduated from South High in 1961. After graduation, he served in the United States Marine Corps Reserve from 1961 to 1968. Jim worked for various employers including, Auerbach’s, JC Penney, Sears, and Varian Associates. Dad loved working in his yard and decorating for the different seasons and holidays. He especially loved reading the Book of Mormon. Nothing gave him more joy than being surrounded by his family. Dad made the holidays fun and memorable; he even played Santa for many families. Dad loved watching sports, especially the Utes and Yankees; he coached youth baseball and football for many years. Dad served in a variety of church callings including working in the Bountiful Temple and serving 2 stake missions. Jim is survived by his wife DeeAnn, his children Corie (Scott) Samuelsen, Mike (Apryl) Williams, Matt Williams, and Chalene (Garin) Servoss. Grandchildren Colton (Lauren) Samuelsen, Shalece (Taylor) Allen, Treyden, Brennin, Veygas, Alana, Kylee, Dean Williams, Donovan, Jonas, Phoenix, and Charlie Servoss. Great Grandson Kale Allen. Jim is preceded in death by his parents John and Donna Williams, his brother Robert Williams, sister in law Arlene Williams, and Nephew Steven Williams. The viewing will be held on Wednesday August 10, 2016 at 10:00 AM to 11:30 AM at the Val Verda 5th Ward 2633 S. 50 W. Bountiful, Utah. Funeral Services will follow at the same location at 12:00 PM. Interment will be at the Bountiful City Cemetery. We love you Dad with all our hearts! The family would like to thank the many Doctors and Nurses at the Huntsman Cancer Institute, The University of Utah Hospital and Care Centers, and Silverado Hospice. Thank you to everyone at Serenity Funeral Home.

The family of James Harlan Williams created this Life Tributes page to make it easy to share your memories.