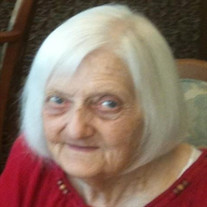 Janis Muriel Pinkney Simmons died on Sunday, January 4, 2015. Janis was born on March 8th, 1926 as the thirteenth and last child to Fred Coatsworth Pinkney and Jessie Josephine Gallagher in Littleton, Colorado. Janis was somewhat of a tomboy and enjoyed playing in the rural area and their big house. Janis enjoyed photography and using the darkroom which her father had created in the basement. Janis graduated from high school and moved to California where her brother Fred had lined up a photography job for her at Douglas Aircraft Company in Santa Monica, California. It was there that she met her future husband, Kenneth Roy Simmons. They were married on July 3rd, 1947 in Santa Monica. Janis and Ken soon settled in Culver City, California, where they began raising their two children, Robert (Bob) Frank Simmons and Glenn Owen Simmons. Janis worked as a secretary (typist) some times to help make ends meet. Later they moved to Newbury Park, California, where she and Ken resided until 2006, at which time they moved to Alpine, Utah. Janis was a very good pianist and enjoyed playing classical music, often as a way to express her feelings. She enjoyed taking many pictures throughout her life and sharing her love of photography, even creating a sometimes photography dark room in an interior bathroom of the house. One of her favorite picture taking opportunities was cloud formations. Janis had a great love of art and nature. She especially loved birds, which often caused her to chase roaming cats out of her yard to protect the birds. She also loved their dog “Skippy”. She took her children to many museums and art exhibits to share her love for art, and tried her hand at sculpture and pottery. Janis loved books and surrounded herself with them. In her old age she especially loved colorful books of birds, animals, nature and art. Janis was known for her kindness and thoughtfulness in spite of the challenges she faced in life. At the Charleston rest home in Cedar Hills, Utah, she was well known by all the staff and other residents for her kindness, cheerfulness, and friendliness. She is survived by her sons Bob (Jill) Simmons of St George, Utah and Glenn (Debbie) Simmons of Alpine, Utah as well as many grandchildren and great grandchildren. Janis was predeceased by her husband Ken, her parents and her twelve brothers and sisters. We are sure a great party is being held now! Special thanks go to the staff of the Charleston (and also Envision Care) for making her last years so enjoyable and comfortable.

The family of Janis Muriel Pinkney Simmons created this Life Tributes page to make it easy to share your memories.