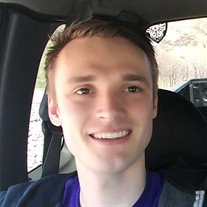 Jaron C. Valentine (Val), 24, passed away on June 13, 2018, in Provo, UT. He was born October 8, 1993. Jaron was born in Salt Lake City, Utah, but at the age of six he and his mom moved to Pleasant Grove where he attended Manila Elementary, Pleasant Grove Junior High, and American Fork High School. He finished high school his junior year while also completing 9 credits at UVU. Those of you who know Jaron, know that he cannot sit still (unless he was glued to a video game). He has had this trait since he was a baby, and during his younger days while even playing games he would jump and flap his arms constantly. Of course, this followed him to school, which meant that we as parents got to know the administrative staff on a first name basis, bless his heart. Jaron also had a knack for knowing everything at a young age, he could never understand why he should listen to anyone, and frequently conversation ended with him saying “why should I listen to them, I know what’s best for me”. One of his greatest qualities was the respect that he always showed his parents. Jaron never had a shortage of energy in anything he did, there was never a dull moment around Jaron he was always doing something, and he always had something to say, he had a knack for making everyone feel comfortable around him. Jaron was always adventurous and would up and move to another place or state at the drop of a hat. He knew he could make it work out and lived life one day at a time. He had a loving heart and a soft spot for animals, especially cats. He had such a zest for life and the best sense of humor, you couldn’t be around him without laughing. He was so smart and was always willing to help anybody with any technological problems. He loved taking things apart to get a better understanding of how it worked, and he always put it back together which frequently involved the use of electrical or duct tape. He loved his job in the Cedar Hill’s Walmart where he worked in asset protection. He always had the best stories to tell and he truly loved his co-workers at the store. Jaron was a wonderful son, brother, grandson, and friend he will be sorely missed. We love you Jaron, may you find peace and comfort on the other side. Survived by: Parents; Mathew, Jenny Nehring; Jacob, Sandy Burningham as well as siblings Sophia, Daniel, Madilyn, Kourtney, Samantha, Austin, Joshua, Zachary Service Information: Funeral services will be held Wednesday, June 20, 12:00 at the LDS chapel located at 408 W. 1300 N. Pleasant Grove with a viewing preceding the funeral from 9:30-11:30 am. Thank you for all the love and support provided by friends and family, the Cedar Hills Walmart, and the North Field 4th ward. Please share memories and condolences at www.serenityfhs.com

Jaron C. Valentine (Val), 24, passed away on June 13, 2018, in Provo, UT. He was born October 8, 1993. Jaron was born in Salt Lake City, Utah, but at the age of six he and his mom moved to Pleasant Grove where he attended Manila Elementary,... View Obituary & Service Information

The family of Jaron C. Valentine created this Life Tributes page to make it easy to share your memories.