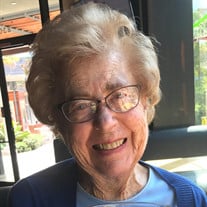 Jean Margaret Sealander Cormack, age 88, died beautifully on July 2, 2018, at Sunrise Senior Living in Holladay, Utah. The music of Bach was playing, prayers and tears were expressed, the Holy Spirit was present, and her family was at her side as she breathed her last. The daughter of a Swedish immigrant (Jonas Conrad Sealander) and a German-American (Sena Caroline Schwenzfeier Sealander), Jean was born in Bellingham, WA on September 19, 1929. Of course she was Lutheran! Jean graduated from Bellingham High School, and in 1951 received her bachelor's degree in Bacteriology and Public Health from Washington State College (University), Phi Beta Kappa. At Swedish Hospital in Seattle, Jean completed her training as a Medical Technologist, and worked in the lab. In the mid 1950s, she moved to San Francisco, worked at UCSF in research, and found a social circle at the Young Ambassador's group at Calvary Presbyterian Church. It was there she met Douglas Stuart Cormack, and on November 30, 1957 they were married at Ebenezer Lutheran Church. Jean and Doug settled in San Mateo, CA, where Jean worked in the lab at Sequoia Hospital in Redwood City for over 30 years. Jean succumbed to the Presbyterian pressure of Doug, and the Cormack family was actively involved at First Presbyterian Church, San Mateo, where Jean served many terms as an elder on session; her passion was adult education and guiding candidates as they entered the ministry. She was also known to never be shy in expressing her opinions on any church matter. Jean was a proud member of the League of Women Voters and the American Association of University Women, where she was celebrated as a 50 year member. The Cormacks loved vacations, especially beaching and boating in San Diego and Mexico, and two-week long nautical explorations in the San Juan Islands and the Sunshine Coast of British Columbia. Jean graciously adopted Doug's passion for fishing, and was particularly proud of her 25 lbs salmon. Jean and Doug traveled extensively--including the East Coast, Hawaii, Britain, Sweden, Germany, France, Italy, Australia, New Zealand, and Bora Bora. After Doug's death in 2004, Jean remained very active in San Mateo, volunteering in public schools, driving the elderly, serving at church, and socializing with friends and neighbors. In 2015 Jean moved to Salt Lake City to be near her daughter and family, and quickly became a member of Mt. Olympus Presbyterian Church where her son-in-law happened to be the pastor. Until Jean's dying day, she was most proud of her "seven grandchildren," and always lived by the motto, "Life is full." Jean is survived by her sister, Carol Phillips, niece Lee Ellen, nephew Todd; son David Cormack, his wife, Michelle, and their children Andrew, Catherine, Peter, and Michael; and by her daughter, Nancy Cormack-Hughes, her husband Philip, and their children Sena (Graeme), Cara, and Jordan. A Memorial Service will be held at Mt Olympus Presbyterian Church (3280 E 3900 S, 84124) on Monday, July 16th, at 3 PM. Later this summer, a memorial will be held in San Mateo, CA, and ultimately an internment in Ferndale, WA. The family would like to thank Sunrise Senior Living and Bristol Hospice for their loving and gracious care of Jean, as well as all of the friends who befriended, prayed, and upheld Jean in her final months on this earth. Thanks be to God for a life well-lived and baptism now made complete.

Jean Margaret Sealander Cormack, age 88, died beautifully on July 2, 2018, at Sunrise Senior Living in Holladay, Utah. The music of Bach was playing, prayers and tears were expressed, the Holy Spirit was present, and her family was at her side... View Obituary & Service Information

The family of Jean Margaret Sealander Cormack created this Life Tributes page to make it easy to share your memories.