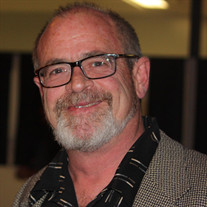 Jeff W. Belnap, age 59, passed away from cancer on May 4th 2018 in Sandy, UT. He was born Dec. 14th 1958 in Salt Lake City Utah to Vola Belnap and Wayne Belnap. He married his kindred spirit, Jill A. Tomlin on Feb. 12th 1983. Jeff had fond memories of his childhood in Murray and later grew up to receive his bachelors in Mechanical Engineering from the University of Utah. In his later years you could often find him outdoors, fishing, sitting by a campfire, smoking his pipe, strumming his guitar and singing. He was honoured to have the opportunity to sing with the Salt Lake Men’s Choir for several years and regularly came home singing a lovely assortment of Christmas songs starting in August. Most importantly, Jeff ensured his family and friends felt nothing but love. He was the most patient, loving and kind brother, son, husband and father anyone could hope for. He was and will remain to be, a peaceful presence in our lives. Jeff is survived by his goddess, Jill Belnap, and his three rays of sunshine, Kayesha, Emma and Nicole. He is also survived by his siblings, Michael, Louis, Julie, Becky and his loving mother Vola. He is preceded in death by his sister, Valerie and his father, Wayne Belnap. Jeff has returned to the universal energy, his higher self. His wishes were for us not to mourn his passing, but instead to celebrate his life. So, please join us in sharing food, drinks & memories on Sunday, May 20th at 4pm at 13100 S 1185 E Draper, UT. Jeff’s immediate family would like to thank everyone who supported them through this challenging journey. They would also like to thank Salt Lake Men’s Choir for accepting him as he was and respecting his life choices. In lieu of flowers, his girls request donations to be made to the Salt Lake Men’s Choir in his honour, http://saltlakemenschoir.org/donate/ Please share memories and condolences at www.serenityfhs.com

The family of Jeff W. Belnap created this Life Tributes page to make it easy to share your memories.