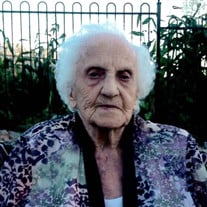 Jennie Nevitt Ney Barber, passed away peacefully on September 12, 2016 in Orem, Utah at the age of 94. She was born on October 20, 1921 in Vermillon, Alberta, Canada to Joseph Williams Nevitt and Edith Dixon Nevitt. Jennie grew up in Canada and England learned the values of hard work and loyalty from her family. She worked her entire life as a dedicated caretaker for the elderly as a Licensed Practical Nurse (LPN). While in Canada Jennie married and had two daughters, Evelyn and Gloria. In 1950 she met and married Joseph James Ney and began making her home in Payson, Utah. In 1968, Joseph passed away leaving Jennie to be the primary breadwinner and nurturer of their four children Larry, Sheila, Kim and Michael. As another testament to her family love and loyalty, she was not only a grandmother, but also a mother to four of her grandchildren Becki, Aimee, Ryan, and Kassie. She spent her entire life in constant devotion to her family. All that knew Jennie would describe her as spirited, quick-witted, and caring. As portrayed by her grandson Ryan, “I never had a better friend than her my whole life. She was there for me when I had no one. She was there for me when I had everything. My daughter Jennie carries on her name and memory of being a sweet, funny, and sassy woman with more love than this world could contain. Grandma’s arms now spread through the Universe and are hugging us now.” Jennie is survived by her children, grandchildren, and 94 years worth of countless friends. Jennie is preceded in death by numerous family members and her adored daughter Sheila. Thank you to the various family members who have supported Grandma over the many years. Also a very special thank you to the wonderful staff at Canyon Breeze Assisted Living Center in Orem – in particular thank you to her aides Victoria and Jill who made her feel so very special. Another special friend to Jennie was Dick Hunsacker of Springville, Utah. Dick was a neighbor and friend without measure who assisted Jennie with so many household tasks when she was living independently for many years. A private family graveside service will be held on Friday, September 16, 2016 at 1:00 pm at the Payson City Cemetery.

Jennie Nevitt Ney Barber, passed away peacefully on September 12, 2016 in Orem, Utah at the age of 94. She was born on October 20, 1921 in Vermillon, Alberta, Canada to Joseph Williams Nevitt and Edith Dixon Nevitt. Jennie grew up in Canada... View Obituary & Service Information

The family of Jennie Nevitt Ney Barber created this Life Tributes page to make it easy to share your memories.