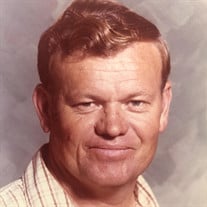 Funeral service zoom link: https://zoom.us/j/91832636914?pwd=cGxub0l3MzJTdmFZYlFGeWltTlVrdz09 Meeting ID: 918 3263 6914 Passcode: 414885 Jerald Alonzo Montierth passed away peacefully at home on March 9, 2022 at 10:30 a.m. with his humor and grit intact. He was 87 years old. Jerry was born on March 11, 1934 at his grandmother Diantha Craig’s home in Central, Arizona. Jerry was the first born child to Alonzo and Leora Montierth followed by his brother (Eddy) and three sisters (Val Donna, Kay, and Dian). Jerry spent his childhood as a real cowboy riding horses and branding cattle on his father’s cattle ranch at the base of the Graham Mountains in Safford, Arizona. During the blistering Arizona summers, he and his family would live at their family cabin in the Graham Mountains. His father worked the ranch during the week and would bring them more food on the weekends. Jerry had very fond memories of those summers and called them some of the happiest times of his life. Jerry graduated from Safford High School in 1952, and then returned to the Graham Mountains to work for the Forest Service on a forest fire look-out tower for 3 years. In 1955, Jerry received a mission call for the Church of Jesus Christ of Latter-Day Saints to serve in the Samoan Mission. It was quite the culture shock for a young cowboy from the Arizona Desert. However, during the 2 1/2 years of service he developed a deep and abiding love for the people, culture, and land of Samoa. He prayed, dreamed, thought, and spoke fluent Samoan all throughout his life, and absolutely loved meeting and speaking to Samoans wherever and when ever he could. A direct descendant of Lot Smith, Jerry was very proud of his Mormon Pioneer Heritage and was a lifelong faithful member of the Church of Jesus Christ of Latter-day Saints, and an ordained High Priest. Jerry served as a Stake Physical Facilities Representative for many years, and later coordinated the Stake Baptisms. He loved this calling and saved every baptismal program for the many baptisms he attended. Jerry met the love of his life, Bertie Sue Davis while she was staying with her aunt, a neighbor of Jerry’s best friend. Jerry said it was love at first sight for him, but he had to wait a few years before he would date and eventually marry her. Jerry and Sue wrote letters to each other often as friends, and all through his mission in Samoa. They began courting soon after he returned home, and were married for Time and All Eternity in the Mesa Temple, on December 13, 1958. After they were married, Jerry and Sue spent a few years in Safford, Arizona where they welcomed two children (Jerald Wayne, and Karen Sue) into their family before they moved and settled in Whittier, California in 1962. There they had two more children (Craig Davis, and David Sean). In California, Jerry worked as a gardener for the maintenance department in the South Whittier School District, and also had his own gardening business where he worked for his own clients in the evenings and on Saturdays. He worked hard to support and provide for his family, often working long hours, but always made sure to make time for his family. Jerry and Sue sold their Whittier home of 56 years and made the move to Utah in June 2021 to be closer to more of their family. Jerry was quiet and reserved, a hard worker, and a cowboy through and through. And much like a gardener, Jerry cultivated, strengthened, and supported his family. He was always someone his family could count on to help without hesitation whenever they were in need. He was adored by his grandchildren and great-grandchildren. Jerry is survived by his wife Sue Montierth, his sister Dian (Rick) Denton, his son Wayne (Sheila) Montierth, his daughter Karen (Kevin) Kartchner, his son Craig (April) Montierth, and his son Sean (Gwen) Montierth. He is also survived by his 13 grandchildren, and 19 great-grandchildren (his 20th great-grandchild is due in July). Jerry was preceded in death by his parents, his brother Edward Ellis Montierth, and two of his sisters, Val Donna Hathaway, and Kay McElhaney. Funeral Services for Jerry will be held on Saturday March 19, 2022 at 11:00 a.m. at the building for The Church of Jesus Christ of Latter-day Saints located at 12682 S Starlite Hills Lane in Herriman, Utah. There will be a viewing before the service from 9:30 until 10:30 a.m. The burial will take place following the service at the Herriman City Cemetery. The family would like to thank all those in Sue and Jerry’s ward who helped us get grandpa to bed each night, and those who served us in other ways. We would also like to thank all those at Inspiration Home Health and Hospice for the wonderful support they gave us in caring for Jerry the last two months so he could be at home surrounded by his family.