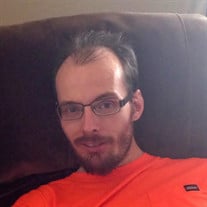 Jeremy passed away peacefully at his home on August 17, 2017 after a courageous battle with Huntington’s Disease, he was surrounded by his loving family and friends. Jeremy was the family comedian, a lover of karaoke and the light of our lives. Born on May 27, 1975, he is the son of Gary Robert Tolman and Carma Ann Andersen Tolman and the youngest of 6 children. Jeremy’s naturally funny personality became apparent at a young age. He loved to joke, laugh and pull pranks on his siblings. As a teenager, he developed a passion for role play games such as Risk and Dungeons and Dragons, he continued to play for as long as he was able. He attended Kearns High School, where he played football and made friends that he would keep for the rest of his life. After high school, Jeremy and several of his friends joined the Armed Forces. Jeremy joined the United States Army and served with the Wolfhounds; 1st Battalion, 27th Infantry regiment, 2nd Brigade Combat Team. He was stationed in Hawaii and spent peacekeeping time in Egypt, Jerusalem and Israel. While serving our country, his sense of humor was never dampened. His Army comrades tell stories of blue hair that he tried to pass off as a natural color, falling asleep on the beach which resulted in an article 15 for his terrible sunburn and his commanding officers always wondering what antics “Tolman” had been up to on his time off. Jeremy always kept life in the barracks fun and interesting. After Jeremy returned home from the military, he began work at Hexcel Corporation. He made great friends and continued his employment until Huntington’s Disease made it impossible to continue to work. Jeremy lived life to the fullest and travelled the world with his “brothers from other mothers”. He loved to go clubbing and show off his “sweet moves” aka rock and swing his arms wildly. He always looked forward to family karaoke parties and always had to sing Abba’s “Dancing Queen” and “I Feel Like a Woman” by Shania Twain. Jeremy’s most cherished moments were hanging out with his friends and having large family dinners and events. Family was the most important thing to him, every Christmas he would gift each family gift certificates to the same restaurant with the understanding that no one could use the certificate until the entire family could go together. He is preceded in death by his father, Gary Tolman. He is survived by his mother, Carma Andersen Tolman, his brothers and sisters: Elaine Dennon, Mark (Cindy) Dennon, Shelly (Jack) Fenn, Andy (Stevie) Thurber and Brad (Teresa) Thurber. His is also survived by numerous nieces, nephews and lifelong friends. Viewing and Funeral services at Utah Veterans Cemetery & Memorial Park, 17111 S Camp Williams Road, Bluffdale, on Tuesday, August 22. Viewing at 10:00 am at the Veterans Cemetery chapel followed by the funeral service at 11:00 am. A graveside service with full military honors will follow at 12:30pm. Lunch and remembrance to follow at West Jordan Stake 2666 W 7000 S West Jordan Utah. Celebration of life later that evening at Brad Thurbers house. The family would like to offer a special thank you to Jeremy’s team at Rocky Mountain Hospice, especially his amazing nurse of 2.5 years, Erica. He loved them tremendously and they made his day fun and happy. Also, to Beau and Staff at Serenity Funeral Home. Your patience and understanding has helped make this sad time a little easier. As well as the West Jordan Stake Relief Society for hosting lunch. You have eased a burden for the family and we will never forget your kindness. To all of the extended family and friends that have reached out to offer help and support. Your kind thoughts and prayers has helped to carry us through this time of sadness. A huge and most heartfelt thank you to Jeremy’s lifelong friends who have been part of his journey from beginning to end.

Jeremy passed away peacefully at his home on August 17, 2017 after a courageous battle with Huntington&#8217;s Disease, he was surrounded by his loving family and friends. Jeremy was the family comedian, a lover of karaoke and the light of our... View Obituary & Service Information

The family of Jeremy Robert Tolman created this Life Tributes page to make it easy to share your memories.