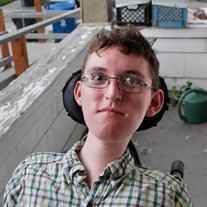 Jeromiah Asher Drennan, age 19, bravely passed away March 22, 2017, in Provo, Utah at Utah Valley Hospital due to respiratory complications associated with his disability. He was born the 11th of July, 1997 on the Isle of Wight in England to Deborah and Robert Drennan. Jeromiah was inquisitive and mischievous at a young age, always asking questions wanting to know how and why things worked. At the age of three he was diagnosed with Duchenne Muscular Dystrophy, a terminal condition affecting muscle growth and regeneration. In 2006 he, along with his mother and siblings, relocated to live in Provo, Utah, gaining many new friends including a wonderful step-father and step-brother. He struggled further with his disability and lost the ability to walk in 2009. What Jeromiah lacked physically could never diminish his thirst for knowledge and brilliant intelligence. In 2008 he was recognized for achieving the top ten percent in the country in the Iowa testing for science. In 2011 he received the Utah Valley Chamber of Commerce Great Kid Award. In 2013 he was awarded a National Honor Society certificate of membership at Walden School of Liberal Arts. In 2016 he graduated from American International School of Utah as the Salutatorian, gaining his diploma with ACT honors and congressional scholastic award. His rousing salutatory speech gained a standing ovation. Throughout his life he navigated numerous hospital and doctor visits, endured a feeding tube, full spinal fusion surgery, and several life sustaining machines with dignity and bravery. His hobbies included transcribing and listening to music, anything and everything computer related, keeping up to date with nerdy YouTube videos and blogs. He thoroughly enjoyed nature programs and documentaries. He was passionate about urban planning, the environment, maps, transport, and politics. More recently he had been working on his own blog titled: "the Ramblings of Jeromiah." He was adept at making and designing things digitally. His latest project was creating interchangeable widgets for his computer interface to look exactly like several London Underground station maps. He was a gifted writer and all around genius who loved to share his knowledge to help others. All of this he did with an affectionate, dry sense of humor. He thoroughly enjoyed attending institute class at Utah Valley University. Jeromiah was a faithful, determined, and honorable young man always devoted to righteousness, delighted in serving others, diligent in his callings, desiring always to be better and accomplish more. Jem, as he was affectionately called, is survived by his great-grandmother May Ellison; grandparents, John and Joan Ellison, Christine Mayhew, James Drennan, Burt and Lula Knudson, and Gerrel Knudson; his parents Bryce and Deborah Knudson, and Robert Drennan; siblings, Aaron James Drennan, Lucy Bea Drennan, and Tor Bjorn Knudson. Jem was preceded in death by his uncle Robert Ellison and great-grandfather Douglas Ellison. A memorial service will be held Saturday, April 8th 10:00 am at the Freedom Stake Center 835 South 500 West in Provo. A light buffet and sharing of happy memories will follow the service. Thank you to all those who loved Jeromiah, encouraged him, and helped him to achieve his highest potential. He touched the lives of many everywhere he went. Thank you for the outpouring of support and love at this difficult time. Please share memories of how he touched your life and condolences at www.serenityfhs.com. If you would like to contribute to help off-set Jem's medical expenses, you can do so by clicking here: Jeromiah Asher Drennan Memorial Donation Fund Contributions can also be made at any Zion's Bank branch throughout the state by asking for the Jeromiah Asher Drennan Memorial Donation Fund. Thank you!

Jeromiah Asher Drennan, age 19, bravely passed away March 22, 2017, in Provo, Utah at Utah Valley Hospital due to respiratory complications associated with his disability. He was born the 11th of July, 1997 on the Isle of Wight in England to... View Obituary & Service Information

The family of Jeromiah Asher Drennan created this Life Tributes page to make it easy to share your memories.