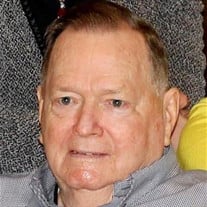 Jesse LaMar Warnick 1934~2015 Jesse LaMar Warnick was born on March 20, 1934 in Salt Lake City, Utah. He went to see his sweetheart in heaven on February 13, 2015. He was born with a very rare health condition called Situs Inversus, a congenital defect in which all internal organs are located on the opposite side of the body. His appendix was on the left, his kidneys and liver were backwards, even his heart beat on the right side of his chest. As a boy, the newpapers called him the Miracle Upsidedown Boy. Even though his heart was physically in the wrong spot, it was never in the wrong place. Whether it was Jerry Felker, Emili Langi, or the countless others of the downtrodden, dad made it his mission to leave the 99 and rescue the one. His heart looked for the abandoned, the alone, the castoff. He used his corny Warnick humor, compassion, and twinkling eyes to find the person at the party sitting to the side. No one person was ever more or less important to dad. But at the same time, he had the ability to make each individual feel that they were the most important person on the planet. No matter what you had done, no matter where you came from, no matter how bad you messed up, you had infinite value to our father. The only exception to this rule was his wife. She was his queen. He held her above all, and served her with all his might. It is fitting that the hopeless romantic went to be by her side for Valentines’ Day. Born in Salt Lake, but moving to Pocatello, Idaho as a kid, dad grew up with little. He sold fruit and vegetables out of his wagon to help the family make ends meet. He served a mission in Northern California. He met Myrna Loy Williams shortly after he got home and was married to her for 52 years. He worked several small businesses and was self employed in Idaho and later in California. LaMar was preceeded in death by wife (Myrna Loy Williams), his parents (Jesse Ralph and Lelen), his brother Howard, his sister Daphne Ray, and his son-in-law Andrew Caras. He is survived by his six children; Christine (Andrew) Caras, Mark (Kathleen) Warnick, Marla (Dale) Olsen, Lelen Peterson, Curt (Rebecca) Warnick and Travis (Camille) Warnick. He also has 22 grand children and 21 great-grandchildren. Services will be held on Friday, February 20 at 11:00 am at the LDS chapel at 225 East 200 North, Orem Ut, 84057. A viewing will be held prior to the funeral from 9:00 am to 10:30 am. Interment will be at the Orem City Cemetery The family would like to thank the staff at Park Place of Pleasant Grove Assisted Living, and particularly Kathy Marsden for her angelic care of our father.

Jesse LaMar Warnick 1934~2015 Jesse LaMar Warnick was born on March 20, 1934 in Salt Lake City, Utah. He went to see his sweetheart in heaven on February 13, 2015. He was born with a very rare health condition called Situs Inversus, a congenital... View Obituary & Service Information

The family of Jesse LaMar Warnick created this Life Tributes page to make it easy to share your memories.