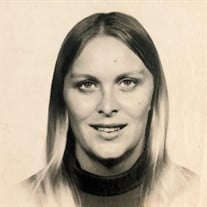 Jill Michaelene Cyr Ziegler, loving mother, wife, daughter, sister, aunt, and friend departed her earthly body in her daughter’s arms in the early hours of October 13, 2021 in Taylorsville, Utah at the age of 73. Jill was born to Jackson Samuel Cyr Sr. and Winona Ellen Cyr in southeastern Washington. Jill grew up and attended school in Waitsburg, Washington, and was proud of her time as a Junior Olympian and an accomplished youth marksman. She enjoyed time spent on her family’s farm, riding horses, and hunting with her father. She moved to California as a young adult. Jill was a renaissance woman and had an rather eclectic career. In her twenties she built crash harnesses, parachutes, and fire-resistant suits for drag racers, and specialized in creating attractive fire-resistant suits for women racers. She was a charter member of the Southern California Independent Driver’s Association, and raced VW-powered dune buggies. In her thirties she was the manager of a loan office in San Clemente, California. Thereafter, she joined the National Maritime Union in San Pedro, California, and became chief cook aboard the tanker Atigun Pass, and later, on board the Meursault. She was an avid scuba diver, motorcyclist, and owned a Honda CB750L. She married Craig Rutherford Ziegler in 1983 and they welcomed their child, Kendra Wynne Ziegler, after years of infertility. Jill fondly called Kendra her “miracle baby”. In 1984, Jill, Craig, and Kendra moved to Walla Walla, Washington to assist in the care of her ailing mother. In 1989, they moved to Houston to be with Craig’s mother, Dortha Rutherford Ziegler. After graduating from University of Houston-Clear Lake in 1992 with a B.S. of Accounting, Jill worked in financial services, and later became a series seven securities trader prior to retiring to pursue her creative passions. Jill was preceded in death by parents, Jack and Winona Cyr, and siblings, Jack Cyr Jr. and Cara Ann Cyr, and brother-in-law Barry Shecter. Jill is survived by her husband, Craig Ziegler; daughter, Kendra Ziegler Knight (partners K. Chetwin and Aaron Lamb); and brother, Joe Cyr; nieces and nephews Christina Cyr, Jackson Cyr III, Rob Cyr, Lee Cyr and their partners and families. Jill’s grandmother heart cherishes the time she spent with Andrew and Corey Desjean, Morgan and Rowan Knight, and Evelyn Lamb. She loved the closeness she shared with her family by marriage including siblings-in-law Ren Shechter, Ann and Eddie Reynolds, Lyn and Mike Crowley, Sung-Hi Morel, and Lynn Marie Brix; nieces and nephews Cheryll Phillips, Dustin Shechter, Marilyn Crowley, Nick Crowley, Kathleen Crowley, Julianne Crowley and their partners and families. In lieu of flowers, memorial donations may be made to the Women's Alzheimer's Research Fund. Services will be held on November 21, 2021 2pm at the Cypress Cowboy Church, 15719 Mueschke Road, Building 3, Cypress, TX 77433. All are welcome to attend.

Jill Michaelene Cyr Ziegler, loving mother, wife, daughter, sister, aunt, and friend departed her earthly body in her daughter&#8217;s arms in the early hours of October 13, 2021 in Taylorsville, Utah at the age of 73. Jill was born to Jackson... View Obituary & Service Information

The family of Jill Cyr Ziegler created this Life Tributes page to make it easy to share your memories.