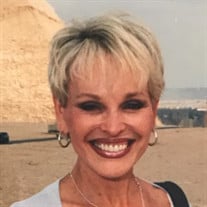 Joan Valerie (nee Mulgannon) Jones passed away on June 9, 2020, at home, surrounded by her family. She is survived by her three children, Valerie Hollingsworth, Veronica McCord, Jason Hollingsworth, son-in-law, Gary McCord, grandchildren; Ashley Bradford, Samantha McCord, Kasey McCord, Maggie McCord, extended family, friends, and her loyal dog Ruger. Joan was born in Washington D.C. on Jan. 8, 1936 to Howard & Marguerite (nee Taylor) Mulgannon. Joan and her brother Howard spent many years of their childhood together, though in transition. Joan spoke often of her deep love for her father. In her early teen years, she was sent to live in Portland, Oregon where Joan attended and graduated from Immaculata Academy. It was during this time that the difficulties she faced in childhood, shaped her self-determination, and inspired her life-long faith. Joan embraced her life fearlessly. Known for her beauty and fashion sense, never one to back away from a challenge, Joan sought out and achieved success in many different areas of life. A lifetime advocate for women in business, Joan pioneered success as a National Account Representative for Kraft General Foods. Self-taught in investing, Joan retired early, then pursued a second career at Nordstrom, specializing in cosmetics sales. Again here, she achieved National Sales level success. Joan pursued traveling abroad, particular favorites were Italy, Ireland, Turkey, and Greece. Joan’s bucket list was long and she knocked many locations off of it in her travels - The Great Pyramids of Egypt, The Rock of Gibraltar, The Panama Canal, Niagara Falls, and most recently, the Great Wall of China. Joan took excellent care of herself and participated in competitive athletics & ballroom dancing. When asked about her biggest athletic accomplishment, Joan expressed that learning to play tennis at age 65. She went on to captain many USTA teams around the Seattle area. Joan culminated her tennis career with a National Championship finalist trophy. Upon moving to Cottonwood Heights, Joan transitioned to pickleball, participating in daily games, and competing in local tournaments. Joan was brave, protective, and fiercely loyal to those she loved. When her spotlight directed to you, you felt it deeply. She served others with her strong organizational skills, a near-perfect memory, and outstanding communication skills. Joan particularly enjoyed mentoring other women, inspiring them, building up their self-confidence, sharing secrets to success for their benefit. The beautiful, powerful, matriarch of her family, lived her life as an example of excellence, self-determination, and devoted love, Joan will never be forgotten.

The family of Joan Valerie Jones created this Life Tributes page to make it easy to share your memories.