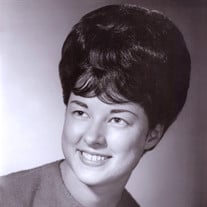 JoAnn Webb Harrison, age 73, was born April 16th, 1943 in Mesa, Arizona to Cecil E. and Cleo R. Webb. She passed away on April 6th, 2017, in the home of her daughter, Colleen Brunson. She is married to Dr. Daniel C. Harrison. They were sealed in the Los Angeles, California LDS Temple on December 30th, 1966. JoAnn, like two of her siblings, had hearing loss which made it impossible for her to hear music. But she and her siblings all sang and loved doing so. JoAnn was a vocal performance major at BYU. JoAnn, her husband, and family have lived in many places including Logan, Ogden, Saint George, and Layton, Utah. They also lived for 20 years in Northern California. JoAnn worked for the IRS for 20 years, was very efficient, and enjoyed her work. She was a great seamstress, cook, and could fix anything from vacuums to broken hearts. Most of all, she was an excellent wife and a loving mother. A member of The Church of Jesus Christ of Latter Day Saints, she served an honorable 18 month mission to New York, where she also served as a guide for the LDS exhibit at the 1964 World’s Fair. She also served as ward and stake primary music director, laurel advisor, the relief society spiritual living leader, young women’s camp director, and primary activity days leader. She had a deep and abiding testimony of Jesus Christ. She dedicated her life to serving Him. She is survived by her husband, Daniel C. Harrison, and her 7 children, James Daniel Harrison (Leslie), Shivonne Tuoti (Greg), Joseph Brandt Harrison (Ginger), Colleen Brunson (Jared), Kathleen Heaton (Christopher), Janette Weakley (RoyAl), and Diane Estrada (Ethan). She and her husband have 24 grandchildren. She is also survived by her siblings VeAnn Gibson, Richard Royle Webb, Dr. Celia Blackburn, and Allen Glen Webb. She was preceded in death by her parents, Cecil Eleazer and Cleo Royle Webb, as well as a brother, Cecil Wildon Webb. A viewing will be held on Thursday, April 13th from 6:00 to 8:00 pm at the Layton Hills Stake Center, 2400 N. University Park Blvd. in Layton, Utah. JoAnn’s funeral service will be held Friday, April 14th at 11:00 am. The family would like to thank all the medical personnel at the Layton Clinic, McKay/Dee Hospital, and Utah Valley Hospital. We would especially like to thank the personnel from Dignity Home Health and Hospice who were charged with the care of our wife and mother. They have been so helpful, understanding, respectful, and loving. We are deeply grateful for their service. Please share memories and condolences at www.serenityfhs.com

JoAnn Webb Harrison, age 73, was born April 16th, 1943 in Mesa, Arizona to Cecil E. and Cleo R. Webb. She passed away on April 6th, 2017, in the home of her daughter, Colleen Brunson. She is married to Dr. Daniel C. Harrison. They were sealed... View Obituary & Service Information

The family of JoAnn Webb Harrison created this Life Tributes page to make it easy to share your memories.