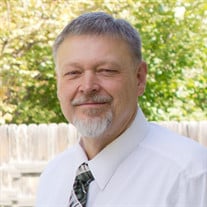 Joel Dee Clarkson, beloved husband, father, grandfather, and friend passed away peacefully in his home in West Jordan, Utah on April 13, 2022. Joel was born in Jerome, Idaho on May 9, 1960 to LaVern Shaw Clarkson and Sharon Lou Paskett. He was the fourth of what would become eight children. Joel often spoke with love and fondness of his childhood years spent on the farm in Jerome. His character and personality were shaped by the lesson of hard work and perseverance he learned there. He grew up in a loving family surrounded by his siblings who were some of his best friends throughout his life. Joel valued relationships outside of his family as well, some of his childhood friendships are still a big part of his life. His greatest love, Christine Marie Clarkson, was a part of his life almost from the very beginning. Their families were close family friends and spent many holidays together. Although she knew right from the start that they were destined to be together, it took some time for Joel to notice her, or perhaps he didn’t have the nerve. In his junior year of high school, he dropped a necklace in her hand saying “I heard it’s your birthday. Happy birthday.” They were inseparable from then on. Shortly after graduation he proposed, and they were married in the Provo Temple on June 12, 1980. They added to their family almost immediately and on April 12, 1981 Jennifer joined the family, followed quickly by Jamie, Brad, and Jackie. His family was his greatest love and his greatest accomplishment. Joel was a man of many talents and skills. He was a respected manufacturing engineer for much of his career and he later applied his passion and skill for engineering as a professor at the Salt Lake Community College. Joel was a man of service, and he taught his children to serve by including them in that service. They spent many summer nights together mowing lawns for ward members and friends. He was a dedicated member of The Church of Jesus Christ of Latter-day Saints. He served in many callings and capacities over the years. Joel loved life, and was endlessly creative. He had a passion for cooking and food. He was a master in the kitchen. He was always pursuing new hobbies, and concocting crazy plans. He found great joy in sharing those hobbies and plans with his family. He leaves behind a treasure trove of memories of time spent together, from building cabins in Alaska, to floating the Green River, to epic Fourth of July fireworks shows, or to regular Sunday dinners. It didn’t matter where they were or what they were doing; as long as they were together, it was everything he needed! Later in life, Joel found great delight in his grandchildren. He spent his time sharing his passion for everything that is good in life with them. He created plays, made a sweat lodge, taught them about great music and BYU football. He spent endless hours finding ways to challenge, teach, and shape them. He loved them and they knew it and that is perhaps the greatest testament to a life well lived. He loved his family deeply and they knew it! Joel is survived by his beloved wife, Christine Marie Clarkson; his children, Jennifer Hyer (Greg Hyer), Jamie Johnson (Brad Johnson), Brad Clarkson (Mandee Clarkson), and Jackie Larson (Jon Larson); his nine grandchildren, McKenna, Kate, Ethan, Abby, Addy, Hailey, Mallory, Brynlee, and Maxwell. And his beloved cat Dotsie. Preceded in death by his parents LaVern Clarkson, and Sharon Paskett, and his brother Timothy Clarkson. Funeral Service will be held Monday, April 18, 2022 at 11:00 a.m. at the Dixie Valley Meetinghouse. Viewing will precede the services at 10:00 a.m. 6500 S Dixie Dr West Jordan UT, 84084 If you would like to tune in virtually, Please follow this Zoom link. https://us02web.zoom.us/j/88186797393 Meeting ID: 881 8679 7393 Graveside services will be held the following day in the Jerome, Idaho cemetery at 11:00 a.m.

Joel Dee Clarkson, beloved husband, father, grandfather, and friend passed away peacefully in his home in West Jordan, Utah on April 13, 2022. Joel was born in Jerome, Idaho on May 9, 1960 to LaVern Shaw Clarkson and Sharon Lou Paskett. He... View Obituary & Service Information

The family of Joel Dee Clarkson created this Life Tributes page to make it easy to share your memories.