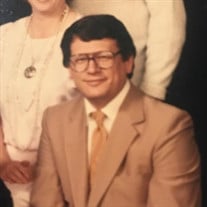 John Leslie Chapman was born in South Salt Lake to Arthur Wiseman Chapman and Vivian Giles Chapman on June 1st, 1945. He had 3 brothers and 4 sisters. Les attended school in South Salt Lake, proudly receiving his diploma 20 years later while attending night school. He married Phyllis Parry. From this union came 4 beautiful children. They later divorced. He married Leslie Ivins and gained a bonus daughter. After 3 years they welcomed one more daughter completing their family of 3 boys and 3 girls. He loved being with his family and grandchildren were a joy to him. His working years with Sears and ending with Dixon paper and with Xpedx for 42 years. He enjoyed collecting records and music from many eras. Hobbies include model trains, history, genealogy and studying facts and figures about many subjects. His faith in God was very personal and strong. He was married and sealed in the temple holding covenants dear. In 2013 he received a liver and kidney transplant from a generous anonymous donor and was blessed to be healthy for most of the 9 1/2 years. He was quite a deep thinker and a man of few words. He cared for his family, working hard and never complaining. He looked forward to catching up with classmates from Madison Elementary school in South Salt Lake during regular lunch dates. He lived his way. He will be missed, but knowing he is free to breathe again and be with loved ones is a great comfort. He is survived by his loving wife of 47 years Leslie. 6 children, John Chapman of Kansas, Cynthia Webster (Todd) of Minnesota, Matthew Chapman (Denise), Robert Chapman of Riverton, Anna Lee (Johnny) of Idaho. Amy Chapman of Utah. 14 grandchildren, 13 great-grandchildren and one on the way. Brothers and sisters: Marian Johnson, Elaine (Tom) Kenney, Paul (Carole) Chapman, Betty Lustig (Larry), Sister in Law Sherrill Chapman. Preceded in death by Vivian and Paul Krantz, Cliff Johnson, Clint and Gerrie Chapman and Harold Chapman. He was blessed with an amazing extended and loving family. The family would like to thank the many medical professionals for their compassionate care and all other who have provided service throughout this journey.

The family of John Leslie Chapman created this Life Tributes page to make it easy to share your memories.