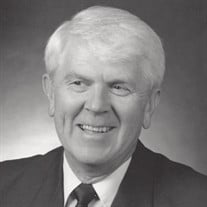 John Anthony Rock, loving husband and father, passed away on April 24, 2020 at his home in Salt Lake City, at the age of 77, after a 3 ½ year battle with cancer. John was born to John D Rock and Helen Welti in Salt Lake City. He attended Olympus High School and lived in Utah his entire life. He met Jane Stinnett at the Black Hawk; he was a bartender and she was a waitress. They married in 1966. John became stepfather to Denise and Mandi, and later, John Jr (Tony) was born. He enlisted with the Utah Air National Guard in 1959. He retired in 1998 as a Chief Master Sergeant and Air Traffic Control Specialist. He was Chief Controller of the 299th Range Control Squadron (Clover Control) for many years and the Senior Enlisted Advisor for the Utah Air National Guard. He was very modest to the point that his family didn’t exactly know what he did, even when we asked. The last few years of his career, he had the privilege of spending time at Ramstein Air Force Base working with European Air Traffic Control (and sending us kinder eggs). His work took him all around the world; California, Washington DC, Texas, Florida, Germany, and Columbia. He enjoyed the Old Farts breakfast in Layton when he could make it; special thanks to Bob Wright for picking him up. He also tried to make it to the monthly UT ANG breakfast and was disappointed when they couldn’t have actual hot breakfast for a while, but glad when it was allowed again. He made life an adventure for his family and friends, including them in work trips when he could. He was a great dad. They hiked and backpacked the Uintahs, camped at Lava Hot Springs, fished at Pass Lake. He loved to ski, taking the kids to Park West and Brighton, though he did enjoy having a drink or a good beer at the lodge. Tony remembers listening to an old 8 track of Johnny Cash on the way there, and his dad being the first person telling him he was not a good singer. He loved to videotape family dinners, much to the dismay of his family at the time, but now are cherished memories. In elementary school he met Harv, Kent, Ann and others who became lifelong friends. He looked forward to the times the Holladay Gang would get together for dinner or breakfast. He talked to them often and they are quite a special bunch. When he found out he had cancer, he wanted to make it to 75. He got 77. When they were young, he, Harv, and Kent didn’t think they would make it passed their 20’s. They lived a lot longer than that. He also wanted to die with a current driver’s license, which he did. Tony got him fishing at Pass Lake this past fall. He enjoyed his catch. The last few weeks of his life, he went to a really happy place in his mind, where he was hiking and having extended cocktail parties with his friends and family. He was kind, giving and compassionate. He was the greatest caregiver to his mom, Jane’s mom, and then to Jane, helping with her battle with cancer. He was always happy, seeing the good in every situation. He had an infectious laugh till the end. John was preceded in death by his wife, Jane. He is survived by his son, Tony (Colette) Rock, and his step daughters, Denise (Jim) Hansen and Mandi (Ron) Gonzales, his step grandson Dallon (Kaci) Walters, and great grandsons, Marcus Allen and Ayden Walters; sisters, Christine (Brent) Cunningham and Mary (Ted) Polevoy; sisters in-law Beckie (Robert) Rock, and Nola (David) Rock; and many cousins, nephews and nieces. Also preceded in death by his parents, John and Helen Rock; his brothers Robert and David Rock. Special thanks to his nurse, Lisa who not only took care of John but also Jane. She has been in invaluable part of our lives the last 10 years. Thanks to Signature Hospice and the underappreciated Dr Lane Childs and the kind-hearted nurses and doctors who left no stone unturned in helping John get life extending treatments the last 3 years. He was able to accomplish many things in his work and personal life, but modestly never spoke about any of it, and he always cared more about others and their needs before his own. He did not want a funeral but allowed us to have an open house. Due to the current Covid-19, we will have that at some future date for his family and friends. Please share memories and condolences at www.serenityfhs.com

John Anthony Rock, loving husband and father, passed away on April 24, 2020 at his home in Salt Lake City, at the age of 77, after a 3 ½ year battle with cancer. John was born to John D Rock and Helen Welti in Salt Lake City. He attended Olympus... View Obituary & Service Information

The family of John Anthony Rock created this Life Tributes page to make it easy to share your memories.

John Anthony Rock, loving husband and father, passed away on...