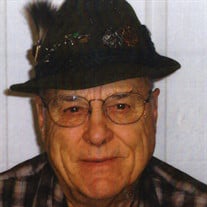 John (Jack) Louis Thurmond passed away on August 5, 2019 in Sandy, Utah at the age of 95. He was born in Eureka, Utah on March 9, 1924 to Byron and Ameila (Peterson) Thurmond and lived there until he was approximately 7 years old. John married Joy Dean Davies on July 13, 1945 and their marriage was later solemnized in the Salt Lake Temple of the Church of Jesus Christ of Latter Day Saints. When Jack’s parents left Eureka, they moved to Bingham and raised their three children. Jack was an exceptional athlete and excelled in every sport he played. In 1941, as the Quarterback of his High School Football team, Bingham became State Champions. Jack loved football most but he was equally talented in Basketball and Baseball. After High School, Jack joined the war effort by enlisting in the Navy Air Corp as an airplane mechanic. As World War II came to an end, Jack left the Navy and later enrolled in the University of Utah where he earned a degree in Business and played football. Like any successful salesman will tell you, many sales deals are closed on the golf course! Jack was a passionate golfer and golfed every chance he could. His late 80’s barely slowed him down and even when he was under hospice care, he was known to ask where his clubs were and how the weather was. Clearly, golf was one of the true passions of his life. Jack remained an avid sportsman until the very end and seldom missed a Utah Jazz game whether on TV or as a season ticket holder. Jack’s professional life followed the success of his athletic life. Jack was an honest and honorable man that made friends easy and for life. His reputation afforded him much success as a salesman. For 20 years he worked for Sears/Allstate Insurance where he was one of their top salesmen. Jack eventually saw that he could do more if he followed his dream of owning his own business. Jack became a pioneer in the car wash industry. His company, Wash-a-Matic, Inc. was an industry leader and built many of Utah’s first self-serve car washes. Jack particularly enjoyed working alongside his Son-In-Law Frank Long as the business grew throughout the western United States. Jack is survived by his wife of 74 years, Joy Dean Thurmond, his daughter Denise (Frank), daughter Tamra (Pete) and son James (Alyssa). He is also survived by 13 grandchildren and 15 great grandchildren. Jack was preceded in death by his parents Byron and Ameila, his Sister Audry, his brother Byron and his oldest daughter Diane, his Son-In-Law Donne Dressen, as well as many cherished Brother in Laws and Sister in Laws. A grave side service will be held on Friday, August 9, 2019 at the Veterans Memorial Cemetery at 17111 S, Camp Williams Road (aka Redwood RD), Bluffdale, Utah. The service will begin at 10:30 and include military honors. A private viewing will be held for family members at 10AM on Wednesday, August 7, 2019 at the Serenity Funeral Home at 12278 S Lone Peak Parkway, #103, Draper, Utah, after which, Jack’s body will be cremated. The family of John L Thurmond would like to thank the selfless and caring Aids and Nurses of Bristol Hospice (formerly Brighton Home Health and Hospice) for their exceptional care and compassion. We would like to thank the Veterans Administration for their commitment to veterans and especially the services they provided us. We would also like to express our deep and sincere gratitude to the staff at the Sandy Health and Rehab Center for the compassionate care they provided these last 8 months. There are so many people that have smoothed out the bumps for us and comforted and guided us when we needed it. Thanks to all the V.A. and Hospice Counselors and Chaplains, your role was not an easy one. Lastly to Lehi Rodriguez and the staff at Serenity Funeral Home, Thank You for the dignified manner in which you helped bring to a close the final earthly chapter of John L Thurmond’s life! To all who knew and loved Jack, please share memories and condolences at www.serenityfhs.com

John (Jack) Louis Thurmond passed away on August 5, 2019 in Sandy, Utah at the age of 95. He was born in Eureka, Utah on March 9, 1924 to Byron and Ameila (Peterson) Thurmond and lived there until he was approximately 7 years old. John married... View Obituary & Service Information

The family of John L. Thurmond created this Life Tributes page to make it easy to share your memories.