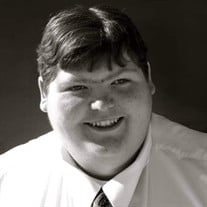 Our loving son, grandson, brother, and friend, Jonathan Dennis Phan, known to his friends and family as Jon, passed away in Murray, Utah on August 19 th , 2020 after a brief fight with renal failure. Jon was born in Escondido, California, on August 25 th , 1992. He was born with Asperger’s Syndrome and Fetal Alcohol Syndrome, but these never slowed him down. He was determined to be treated like everyone else and lived as normal of a life as he could. He had a rough start with life, but was shown his true value to others when he was adopted, along with his two older sisters, by Dennis and Lisa Phan in October 1994. Though he started out in Special Education, he was able to work his way into mainstream school and graduated from Olympus High School with the rest of his class in 2010. He also worked hard and earned his Eagle Scout rank in 2008. To those who knew Jon, he was kind, generous, witty, and had an infectious laugh that could make anyone smile. He wanted to do the right thing, and lived his life helping and lifting everyone who was lucky enough to become close to him. At a young age, Jon became an avid reader. He especially loved listening to audiobooks, and was often found reading or playing a game while listening to a good book. More than anything, Jon loved being an uncle. Even with having Asperger’s Syndrome, he was extremely patient with his nieces and nephews and loved to dote on them. He had a knack for finding the perfect gifts for them. He could often be found sitting with them, reading a book or playing a game with them. Jon was preceded in death by his mother, Lisa. He is survived by his father, Dennis; his siblings Anthony and Christa; Carolyn and children Kathleen and Connor; Grace and family, Jonathan Kackstaetter with their children Emma, Lauren, and Joshua; grandparents Virgil and Lela Kovalenko, and many aunts, uncles, and cousins. A viewing will be held from 9-10 am on Monday, August 24 th , 2020 at the Olympus 4th Ward building at 2700 East 4500 South, Holladay, Utah 84124. A private funeral will be held afterwards from 10-11 am, by invitation only. He will be interred alongside his mother at Wasatch Lawn Mortuary following the funeral service. There will be a gathering after his internment at the pavilion near the playground at Olympus Hills Park, located at 3131 E 4500 S, Salt Lake City, UT 84124, and all are invited to attend to visit with the family. Please bring your own lunch if you wish to join us. In lieu of flowers, please make a donation to The Children’s Center or Primary Children’s Hospital. Until we meet again, bud. In loving memory of Jon, please bring a sticker that reminds you of him that we can put on his casket. We will be broadcasting the service live on Facebook for those who would like to attend from a distance.

Our loving son, grandson, brother, and friend, Jonathan Dennis Phan, known to his friends and family as Jon, passed away in Murray, Utah on August 19 th , 2020 after a brief fight with renal failure. Jon was born in Escondido, California,... View Obituary & Service Information

The family of Jonathan Dennis Phan created this Life Tributes page to make it easy to share your memories.