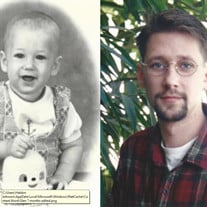 Joseph Glen Burningham 42, father, son, and brother passed away July 6, 2018 in Vineyard, Utah. The second of 4 children, Glen was born December 2, 1975 in San Diego, California to Richard Antone Burningham and Vickie Lyn Henrie Crawford. Glen was married to Lucretia Reynolds on October 13, 2000, and they have two beautiful children. In their married life, they were willing to move to the areas in which Glen has worked, including Southern California, St. George, Utah, Rexburg, Idaho, and Provo, Utah. Glen worked construction, starting when just a teen as a carpet layer in church buildings, traveling to several different states for jobs. He later worked on a remodel of the St. George Opera House with his father, uncle and grandfather; while working this job, he had the opportunity to develop a variety of skills, which led him to a career in construction. He also had the opportunity to work with his father building houses. Glen continued through the years to develop his skills, always learning more and progressing. He has worked for Okland Construction for twelve years as a concrete carpenter, a foreman, a general foreman, and, most recently, a surveyor. He was detail-oriented and the “go-to guy” for many on the job. He has developed a reputation as an organized, knowledgeable, precise, dependable, and hard worker. Glen was known for going above and beyond what was expected of him on large construction projects, including the BYUI Conference Center, a building at the University of Utah, the Cottonwood Intermountain Health Care Center, and the Alta View Hospital Expansion (just to name a few). He also worked directly with sub-contractors, who respected him for his expertise and will feel his loss. All of his co-workers respected him and have said that he was part of their work family, and they cared for him deeply. A creative and talented carpenter, he was always looking for projects after work hours. He built a mud room in their new home in Provo out of the wood from local apple trees. He also finished a nice patio at their new home, where he enjoyed smoking meats on his barbeque, and he built a workshop where he could create beautiful furniture from raw wood—a legacy he has left behind. Known as either Joe or Glen to friends and family, he has left a very large footprint in this life. He was a devoted father who loved his kids and enjoyed being with them anytime and in any activity, including fishing or Home Depot for craft classes on Saturday mornings. Even though Glen and Cretia were recently divorced, he has stayed very close to his children who considered him to be their buddy. He could be found teaching Austin new skills or working with him on projects like the teeter-totter they did for a school project. And he was proud of Kambrye, who had him wrapped around her little finger; he supported and encouraged her natural gift with drawing and art. Glen was very giving and often did service for others; but he did so without looking for recognition or thanks. In fact, Glen was uncomfortable with praise. Survivors include his children Austin Joseph and Kambyre Burningham of Provo, Utah, and siblings Lorraine (Benjamin) Roach of Idaho Falls, Idaho; Dianalyn (Haldon) Johnson of Farmington, Utah; and Douglas (Angela) Burningham of Rigby, Idaho; his father Richard Antone (Susan) Burningham of Washington, Utah; and mother Vickie Lyn Henrie Crawford (Jim) of Farmington, Utah. He is preceded in death by his grandparents Cecil Ivan Burningham and Ethel Matilda Jensen Burningham; Joseph Ward Henrie and Geraldine Anderson Henrie. Funeral services will be held Saturday, July 14, 2018 at the LDS church house in Highland, Utah at 10962 North 6400 West at 11 AM. The family will be receiving between 10:00 and 10:45 at this same church building. Glen’s lifelong wish has been for a horse-drawn carriage to draw his casket with a walking procession to the gravesite. The gravesite dedication will be in the Highland Cemetery at 1:00 PM. There will be a family luncheon in Highland, UT chapel. For those who are affected by it, the family extends a recommendation for the National Suicide Hotline 800-273-8255, Crisis Text Line- Text HOME to 741741 and suicide.lds.org for assistance.

The family of Joseph Glen Burningham created this Life Tributes page to make it easy to share your memories.