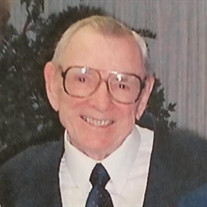 Joseph William Reece, Jr passed away peacefully in his sleep on March 10, 2018 at the age of 95. He was born June 15, 1922 in Cardston, Alberta, Canada to Joseph William Reece, Sr. and Ida Mazell Ross Reece. The family was working in the coal mines in Canada and moved to Utah in 1929. They lived in various places while Joe was growing up. He sold newspapers on the corner of Temple Square as a boy to help his parents. He attended West High School in Salt Lake City where he was he was active in ROTC. In 1942, after the invasion of Pearl Harbor, Joe was drafted into the Untied States Army. The following year he was assigned to South Mountain Reserve in Phoenix, Arizona as quarter master. His duties included caring for the POW’s. Joe met Lovina Shumway at church and soon afterward they won a dance contest at the USO, and their date for eternity began. They were married on Valentine’s Day, 1944, in the Mesa Arizona Temple and settled in Phoenix. They raised two daughters, Sherrilyn and Linda, and two sons, Craig and Sterling. Joe worked for Arizona Public Service in Phoenix as an accountant and retired in 1982 when Lovina’s health declined. Lovina passed away in 1983, and Joe’s mother, Mazell, encouraged him to come to Utah and take care of her. In Utah he courted and married his widowed sister-in-law, Janice Hughes Ruff Reece on March 17, 1984. Joe was a member of the Church of Jesus Christ of Latter-Day Saints and faithfully served in many church positions. His favorites were Ward Greeter and Temple Worker. He made friends with anyone he could and truly cared about others. His hobbies included working with wood, gardening, bookkeeping, and Jerry-rigging and re-purposing. Anything to save money and the environment. Joe was preceded in death by wife Lovina, daughter Sherrilyn, sons Craig and Sterling, and grandson Preston, as well as his parents, sister Lela, and brothers Lyle and Don. He is survived by his wife Janice, daughter Linda, son-in-law Fred Pitman, daughters-in-law Mary Lou Allison Reece Ellis and Layne Eagar Reece, stepchildren Ron Ruff, Cristine (Brad) Draney, Layne (Pat) Ruff, and Paul (Lisa) Ruff, and over 150 grandchildren, great-grandchildren, and great-great-grandchildren, siblings David (Becky) Reece and Mazie (Drew) Binks. Service will be held at The Church of Jesus Christ of Latter Day Saints at 4350 South 1100 East, Millcreek, Utah. On Friday March 16th. Visitation will be from 10:00 am-11:30 with a memorial service beginning at 12:00 noon. Interment will be in Phoenix, Arizona at the Greenwood Memory Lawn Cemetery 2300 West Van Buren St.) on Monday March 19 at 11:30 am.

Joseph William Reece, Jr passed away peacefully in his sleep on March 10, 2018 at the age of 95. He was born June 15, 1922 in Cardston, Alberta, Canada to Joseph William Reece, Sr. and Ida Mazell Ross Reece. The family was working in the coal... View Obituary & Service Information

The family of Joseph William Reece Jr created this Life Tributes page to make it easy to share your memories.

Joseph William Reece, Jr passed away peacefully in his sleep...