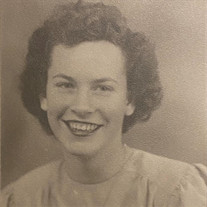 Joyce Merlene Rice (nee Cassell), of Sandy, Utah, passed away peacefully and painlessly, cradled in the arms of her loving daughters, on Friday, May 20th, 2022. With her passing, this world has dimmed and gotten that much less magical - though we are sure that Heaven grew tenfold in light and magic as she arrived. We certainly hope that Saint Peter was wearing his sunglasses. Known to many simply as Nana, though she spent 93 years on this planet, she was strangely only 21 when she died. All of her grandchildren, great grandchildren, and great great grandchildren knew that at age 21 our Nana got her magic - and thus she never aged after that. Nana could feel your tummy to see if you were full enough to leave the dinner table and if you weren’t, she could determine what size space was left and how many bites it would take to fill that space. She could also determine whether you were truly clean after a bath or shower by smelling behind your ear, your elbows, and even (heaven forbid you didn’t wash them) your armpits! She had a knack for teaching all of us discernment, because when asked for permission to do anything that was even *slightly* ill-advised she would cock her head, raise an eyebrow, and say, simply, “suit yourself.” It is family lore that not a single person ever *actually* did the thing they asked if they could do after a “suit yourself” from Nana - even though she never technically said no. Nana could also make you smile with a notoriously off-key verse of “Playmate, Come Out and Play with Me” or with her “patriotic” legs and she could move the salt shaker from one side of the table to the other without touching it - as long as you closed your eyes. Though we have no documented proof, we are fairly convinced that Nana’s two-foot driving style was a holdover from running moonshine where she grew up in Alturas, in Northern California, even after prohibition ended - just because she could. Nana may also still be sought in London for an incident where a lady who looked conspicuously like her, rather than paying for tube fare, decided to crawl through a luggage opening at the Russell Square station at just about midnight - talking an innocent grandson into being her accomplice in this brave act of bucking the British system. Her Irish forebears would have been proud. Nana was truly one of a kind. To her we all say, one final time: “Good night, sweet dreams, God bless, love you.

Joyce Merlene Rice (nee Cassell), of Sandy, Utah, passed away peacefully and painlessly, cradled in the arms of her loving daughters, on Friday, May 20th, 2022. With her passing, this world has dimmed and gotten that much less magical - though... View Obituary & Service Information

The family of Joyce Merlene Rice created this Life Tributes page to make it easy to share your memories.