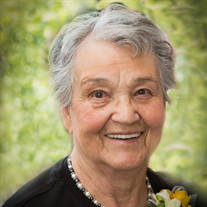 Joyce Graff Snow, beloved mother, grandma, sister, aunt, and friend, passed away on Friday, July 28 in Highland, Utah. She was born on August 25, 1928 in Provo Utah to Elmer and Emmarene Graff. She is finally reunited with her sweetheart G. Gardner Snow, who passed away in 1983. Joyce spent most of her childhood in Hurricane, Utah, where her Dad was the high school basketball coach and shop teacher. She met her husband Gardner when he came to her home to invite her to his 5th birthday party, a memory that stayed with her. They became reacquainted at Dixie College and were married in the St. George temple on June 9, 1948. They were completely devoted to each other. She was a wonderful support to her husband and his career as a teacher. She spent much of her married life in Provo, Utah, and lived in the same home for nearly 60 years. It was a home filled with unconditional love, lots of laughter, and wonderful food. Joyce was a wonderful mother. She raised 6 children in a small home, without every raising her voice. She was a marvelous cook and always opened our home to visitors for Sunday dinner. Family meals always began with a family prayer as everyone knelt around the table. Many summers were spent in Pine Valley Utah, her favorite place. In the early years she worked alongside her husband as they took care of the Pine Valley campground in the summer. Later summers were spent at their cabin. She felt most at home when attending church in the Pine Valley Chapel. Being a mother was her career. But after the death of her husband she worked at Brigham Young University in their risk management office. She especially enjoyed the association she had with the BYU athletes. She was a diehard BYU fan and rarely missed a game. She loved animals, especially dogs. She had a favorite dog, Chippy, who mysteriously showed up as a puppy in the window well on a cold winter night. We always felt like he was a gift sent from Dad. Joyce was a life long member of the Church of Jesus Christ of Latter day Saints. She lovingly served in the Primary, Relief Society, and Young Women’s program. Even in recent years she enjoyed attending Girls Camp, and “kidnapping” her girls for breakfast while wearing her pajamas. She served a church service mission at church headquarters and served for many years as a temple worker in the Provo Temple. Joyce will be remembered for her contagious laugh, her warm quilts, her delicious rolls and pies, her love of water fights, and her unwavering testimony of the gospel of Jesus Christ. Her sense of tradition and quietly expressed deep faith was a bond that all who came in contact with her felt inspired by. Near the end of her life as her memory faded she would say that Gardner was coming to “pick her up after he finished with a church meeting.” He finally came to get her and she is back in his loving arms. We will miss her dearly, but we are overjoyed that she can now continue her eternal courtship. We are sure that she was also met by her daughter Laurene, and the rest of her family and loved ones. Joyce is survived by 3 sons and 2 daughters, Rob (Keri), Kelly (Tami), Glenn (Andrea), Pat (Steve) Soderquist, Mary (Jeff) Bagley, 24 grandchildren and 28 great grandchildren, and her sister, Dorothy Winder. She is preceded in death by her husband, her daughter Laurene, her 4 brothers, a granddaughter and 2 great grandsons. Funeral Services will be held on Friday, August 4 at 11:00 a.m. at the LDS Grandview Ward Chapel, 1120 N. 850 W. Provo. There will be a viewing from 9 to 10:30. Interment will be in the Pine Valley Cemetery at Noon on Saturday, August 5. The family would like to thank her many loving caregivers at Highland Glen Memory Care and Brighton Hospice, especially the compassionate care provided by Annika, Lori, Mitch and Tiffany.

Joyce Graff Snow, beloved mother, grandma, sister, aunt, and friend, passed away on Friday, July 28 in Highland, Utah. She was born on August 25, 1928 in Provo Utah to Elmer and Emmarene Graff. She is finally reunited with her sweetheart... View Obituary & Service Information

The family of Joyce Graff Snow created this Life Tributes page to make it easy to share your memories.