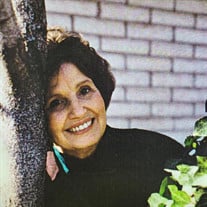 Juanita Mae Webb Conner Carter, 86, passed away Monday, October 5, 2020 in West Jordan, Utah. Juanita was born in Webbers Falls, Oklahoma on February 4, 1934 to Marion and Ima Webb. She was the sixth of seven children. Her brothers, Clifford, Cole, Carl, Coy, and Sister Eunice preceded her in death. She is survived by brother, Charles webb. In 1951 Juanita married Karl Matthew Conner in Roswell, New Mexico. Together they had seven children, Karla Autrey (Roger), Thomas Conner, Carol Magill (Joe), Jeanne Hughes (Allen), Charles Conner (Teri), Elizabeth Vest (Robert) and Kevin Conner (Chris Anne). These two were wonderful parents and grandparents. Family was one of Juanita’s highest priority next to her Heavenly Father and Jesus Christ. Juanita joined The Church of Jesus Christ of Latter Day Saints in May 1963. Juanita spent the next 57 years serving the Lord in every way including serving a Mission with Karl. Sadly Juanita lost her beloved Karl in 1994. Juanita was also preceded in death by daughter in law Cheryl Conner in 2009 and granddaughter Ashley Dawn Dycus in 2000. In 1998 Juanita met and married Arthur Lee Carter. He put the sparkle back in her eye and he became a wonderful second Dad and Grandpa to Juanita’s children and grandchildren. Art’s first wife, Marcella, preceded him in death, but they had four children, Boyd, Craig, Molly and Valeri. Sadly in 2019 Juanita was preceded in death by her beloved Art. Juanita was blessed with 24 grandchildren, 36 great grandchildren and one great great grandchild. Juanita loved baking, cooking, decorating, flowers, music, scriptures, serving the Lord, babies, children and teenagers. She was always known to keep a spotless house. She truly loved and served her family, friends and strangers. Juanita will be laid to rest at the Utah Veterans Memorial in Bluffdale. Services will be held at The Church of Jesus Christ of Latter Day Saints at 7171 South, 2700 west, West Jordan, Utah, on Thursday, October 15, 2020. Viewing will be held at 10:00 a.m., Services at 11:00 a.m. and graveside at 12:30 p.m.

The family of Juanita M. Carter created this Life Tributes page to make it easy to share your memories.