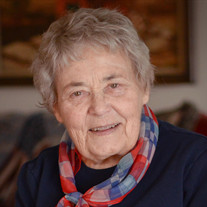 June Pehrson Chapman, age 92, passed away on Monday 6 May 2019 in Provo, Utah due to complications related to age. She was born 5 December 1926 in Murray, Utah to Arthur Edmund Pehrson and Florida Robbins Pehrson. Together with her brother, Kay, they grew up on their farm in Taylorsville, Utah. June participated in 4H and graduated from Granite High in 1945. In acquiring her Bachelor’s degree, she attended the University of Utah, Brigham Young University, and Utah State where she graduated in 1948 in Children’s Clothing. Afterward, she worked as the County Extension Agent for 4H Club in Lane County, Oregon. June completed her Master's degree from Oregon State University in Child Development and Parent Education. She returned to Utah to teach Kindergarten at Wasatch Elementary in Salt Lake, then 1st grade at Boulton Elementary school in Bountiful, Utah. At the age of twenty-seven, she served a mission for the Church of Jesus Christ of Latter Day Saints in Denmark (1953-55). After her mission, she became a teacher consultant at Project Head Start for the Bureau of Indian Affairs, taught Home Economics at the University of Utah, and later served on the Salt Lake City School Board. She also sang with the Mormon Tabernacle Choir for eleven years. She married David Marden Chapman on 29 June 1964 in the Salt Lake Temple. David was a widower with five children, giving her an instant family to help raise: Douglas Marden Chapman (Sue); LaRue Howells (David); Jeanette “Jan” Engle (Ross); Elaine Dunster (Garry); and Arlene Bassett (K. Douglas). Her husband often boasted that he took the Tabernacle Choir with them on their honeymoon because they married just a few days before the choir’s tour. Soon, Mark Pehrson Chapman (Kathryn) was added to the family. During her lifetime, she served as stake primary president and went on multiple missions with her husband, but her favorite calling was as a visiting teacher. In her late 80’s she was blessed to host the sister missionaries in her basement. They brought such peace to her heart and she enjoyed being called “Grandma” as they returned home every day. Preceded in death by her parents, brother, Kay R Pehrson, eight of her posterity and a son-in-law. David and June were married for 45 years before his passing, leaving her a widow for over 9 years. Their blended family has blossomed to a posterity of 6 children, 35 grandchildren, 85 great-grandchildren, 11 great-great-grandchildren, and 33 spouses, totaling 170 posterity, with more on the way. We love you! We miss you already! It will never be the same. The energizer bunny has left the house, but not our hearts and the legacy lives on! June asked us to say “Thank you for all who cared for me and for giving me love and understanding. I’m excited to move on to those who are waiting for me to join them.” Funeral services will be held Saturday, 11 May 2019, at 11:00 a.m. in the Olympus 4th Ward, Salt Lake Olympus Stake Center, 2675 East 4430 South Holladay, UT 84124. A visitation will be held at the ward from 9:30 to 10:30 prior to the funeral. Interment to follow at Larkin Sunset Gardens. Condolences may be shared at www.serenityfhs.com.

June Pehrson Chapman, age 92, passed away on Monday 6 May 2019 in Provo, Utah due to complications related to age. She was born 5 December 1926 in Murray, Utah to Arthur Edmund Pehrson and Florida Robbins Pehrson. Together with her brother,... View Obituary & Service Information

The family of June Pehrson Chapman created this Life Tributes page to make it easy to share your memories.