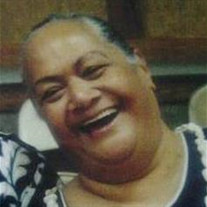 KALISI ‘OVAVA LAVULO FIFITA August 19, 1945 – December 02, 2014 Our beloved sister, aunt, mother, and grandmother, Kalisi ‘Ovava Lavulo Fifita, age 69, slipped peacefully from her earthly abode at 373 Lakewood Drive, Provo, Utah in accordance with the Will of her Heavenly Father. We are joyous in knowing she has re-united with her eternal companion, Paula Manitisa Fifita, and other relatives in the hereafter. We are likewise aware how greatly we miss her already! ‘Ovava was born August 19, 1945 in Nuku’alofa, Tonga, the daughter of Tonga Puku Lavulo and Siu Toafilimoe’unga Tupou’ila. She was adopted by her paternal grandparents, Taniela M. and Sela N. Lavulo, and therefore spent her early years with primary and middle schooling in Pangai, Ha’apai, Kingdom of Tonga. She was baptized a member of The Church of Jesus Christ of Latter- Day-Saints and moved in 1957 to Tongatapu to attend Liahona High School, but later returned to Ha’apai to teach for many years after further studies overseas. She married Paul Manitisa Fifta of Kolofo’ou on August 25, 1971 and later solemnized this union for time and eternity at the New Zealand Temple of the LDS Church. Paula and ‘Ovava migrated to the United States in the late 1980’s to attend Brigham Young University, Hawaii, but continued to travel back and forth to the Tonga Islands to teach. ‘Ovava retired from teaching with the LDS church and left Tonga for the last time in 1997 to settle in, and got naturalized a citizen of the US. ‘Ovava’s love of the Savior Jesus Christ was unsurpassed, and her passion for service to Family and Country were equaled only with her love of service to fellow human beings. She was loved by all, especially her extended family. ‘Ovava is survived by 9 brothers, 9 sisters, her daughter Alisi Tuluta Vasi (Taniela Vasi) and granddaughter, ‘Aine Kalainisi Kato. ‘Ovava was preceded in death by her parents, husband, and sister Mele Lavulo Mafile’o. Funeral Services will be held Thursday, December 11 at 12:30 pm at the Provo Utah Wasatch Stake Center, 1625 S. Slate Canyon Drive, Provo, Utah. The service will be preceded by a family private viewing 7:00 – 9:00 am and general viewing/traditional wake from 9:00 am – 12:10 pm on same date and at same location. Following the service, interment will be held at the Provo City Cemetery at 610 South State Street. Services are under the direction of Peni Maloifo'ou of Serenity Funeral Home The family wishes to thank the Stake President Makai, Bishop Havea, the Sunset 12th Ward, and Peni Malohifo’ou of Serenicare Funeral Home for the loving care and all untold assistance rendered. Tu’a ‘ofa atu!!!

The family of Kalisi Ovava Lavulo Fifita created this Life Tributes page to make it easy to share your memories.