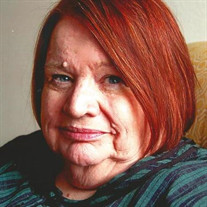 Karen Ann (Edwards) Hansen died in Kaysville, UT, at her home, Saturday, March 21, 2015 after fighting a lengthy illness. Her tenacity in defying her prognosis, while amazing medical professionals, came as no surprise to her family and enabled her and her loved ones extra time. Karen was born, March 18, 1950 in Salt Lake City, UT to Lee and Jean Edwards, the 4th of 5 children. She spent her childhood in and around Salt Lake City and southern California. Karen met and married Tom Hansen in 1967, and they raised 4 children together. Karen was known for her compassionate service and love of charity. Both things were given freely and sincerely. However, besides her family, her first loves were the Gospel of Jesus Christ and her membership in the Church of Jesus Christ of Latter-Day Saints, fulfilling multiple callings, and encouraging faithful church involvement in her children and grandchildren - not to mention siblings, nieces, nephews, friends, friend’s kids, kid’s friends, and one very stubborn yet fiercely devoted husband. She was an avid missionary and promoter of missionary work among the previously listed group. Karen also had an intense love of music, especially Church Hymns and the Golden Age of musical theater. Her children grew up to the sounds of her beautiful soprano voice singing “Love One Another” and “Gonna Wash that Man Right Outta My Hair” among many others. For a time she and Tom lived with their children in Southern California where she was involved with a local LDS women’s choir. They were privileged to perform at a Mosque in San Diego, CA. for President Spencer W. Kimball. The evening also included a chance meeting on an elevator with the Prophet and his wife Cammilla, where an intimate conversation took place, and she was assured of her self worth from Sister Kimball. This was a defining moment of Karen’s life, and one she shared with her family. Though a mother and wife first she contributed to the support of her family by working many years at Anser-Fone, an answering service in Salt Lake City. In 1988 she and her husband relocated to Atlanta, GA. where they both accepted employment with the LDS Church’s Physical Facilities. She retired from that in 2003. Karen is survived by her husband of 48 years Tom Hansen currently of Kaysville, UT. Lisa Hansen-Taylor (Jerry Drozdiel), Lawrenceville, GA. Chad Hansen (Missy), American Fork, UT. Danny Hansen (Kendra), Kaysville, UT. Melissa Murrell (Roger), Las Vegas NV., as well as 16 Grand-Children and 2 Great-Grandchildren. She is also survived by her siblings; Robert, Sandra, Richard and Mike, and a large extended family. Karen was preceded in death by her infant son David and her parents Lee and Jean Edwards. A Memorial Service in Karen’s honor will be held Thursday March 26th, 2015 at 11:00 A.M. at the Kaysville Central Stake Center ( LDS Chapel) at: 555 N 100 E (Fairfield RD) Kaysville, Utah, 84037 There will also be a viewing Wednesday March 25, 2015 from 6:00- 8:00 P.M. and again at 9:30 A.M. the morning of the memorial service. Both viewings will take place in the Relief Society Room of the LDS Chapel where the memorial service is being held. Flowers will be received at 555n 100 e, Kaysville Utah from 4:30 – 5:30 PM March 25, 2015 or they can be sent directly to Serenity Funeral Home 12278 Lone Peak pkwy, Draper, Utah, 84020 Friends and family are encouraged to post memories and thoughts at www.serenityfhs.com

Karen Ann (Edwards) Hansen died in Kaysville, UT, at her home, Saturday, March 21, 2015 after fighting a lengthy illness. Her tenacity in defying her prognosis, while amazing medical professionals, came as no surprise to her family and enabled... View Obituary & Service Information

The family of Karen Ann (Edwards) Hansen created this Life Tributes page to make it easy to share your memories.