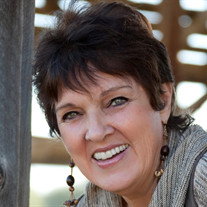 Kathleen Holbrook Norton Hinckley, 70, our beloved mother, sister, aunt, grandmother and friend passed away September 10, 2015, in Salt Lake City, UT., from cancer and kidney failure. She was born in Salt Lake City, UT, on March 19, 1945, to Keith Moss Holbrook and Kolleen Wood Holbrook Johnson. She was the oldest of four children and spent her youth in Bountiful, UT. Kathleen graduated from Bountiful High School where she represented her class as Senior Vice President, a member of the Madrigal Choir, and was voted Homecoming Queen her senior year. She was active in many school clubs and supported all activities. Kathy attended Utah State University in Logan, UT and pledged Alpha Chi Omega Sorority. It was at USU that she met her husband, Robert Roy Norton, son of Wilmer and Lorraine Norton. They were married on March 24, 1967, in the LDS Salt Lake City Temple. They lived in Scottsdale and Tucson, Arizona, and in Bountiful, UT, and together reared 5 sons and 1 daughter. Kathleen later married David Oman Hinckley of Salt Lake City, UT on June 15, 1987, and they had 1 son while residing on the Hinckley Ranch in Salt Lake City, UT. Both husbands and her parents preceded her in death. Kathleen was a member of The Church of Jesus Christ of Latter-day Saints and served in various leadership positions over the Primary, Young Women’s, and Relief Society. In later years, she served as a temple worker in the Manti LDS Temple. She loved the memories of our foundational family traditions and said that “the scaffolding of the gospel gave her strength and peace to do whatever was next and whatever was needed.” Kathleen loved music and was a very talented pianist and organist. Throughout her life she accompanied several choral groups, and provided the music at many church functions and funerals. One of her most prized possessions was her piano, with several boxes of music. Kathleen had a warm heart and loving spirit. She helped many and befriended all within different circles of friendships. She loved to read and continued her learning throughout her life. She loved to travel. She toured Central Europe, Russia, Australia, New Zealand, Canada, Hong Kong and China. It wasn’t unusual for Kathy to load up her car and hit the road crossing the USA for visits with friends and family. Professionally, Kathleen worked as a Legal Secretary in various law firms and later supported her young family while working the night shift at the US Postal Service. Kathleen is survived by her 7 children, 14 grandchildren, and 3 great-grandchildren. Her children include: Thayne (Peggy) Norton of Boulder, CO; Brandon (Heather) Norton of Camas, WA.; Heath Norton of Hailey, ID; Vanessa (Willie) Averett of Springville, UT; Rhett (Brenda) Norton of Springville, UT; Dax (Laura) Norton of Atascadero, CA; Dalon Hinckley of Salt Lake City, UT. She claims one "adopted" son as well, Martin Wisby, of Flower Mound, OK. She is also survived by two brothers: Gregory Keith Holbrook and Val Jerome Holbrook, both of North Salt Lake City, UT, and one sister, Kristeen (Craig) Siddoway of Bountiful, UT. She also leaves behind numerous loving relatives and friends. Family and friends may attend the viewing on the morning of Saturday, September 12, 2015, from 10:30 to 11:45 AM at the Northpoint Ward located at 1460 North Morton Drive, Salt Lake City, Utah. Funeral Service will follow at the same place at 12:00 PM. Interment will be at the Evergreen Cemetery in Springville, UT.

The family of Kathleen Holbrook Norton Hinckley created this Life Tributes page to make it easy to share your memories.