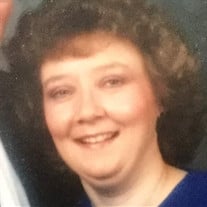 Kathlene Andreasen Wallace 1962 – 2017 Kathlene Andreasen Wallace passed away December 6, 2017 in Salt Lake City, Utah. She was born in Ridgecrest, California on February 10, 1962 to Frank Marvin and Marlene (McGavin) Andreasen. She married William Lloyd Wallace June 23, 1994 in the Salt Lake Temple. Kathlene had a wonderful childhood with her loving parents and brothers on a small farm in Vernal Utah. She graduated from Uintah High School and also attended Snow College in Ephraim, Utah. After this she worked as a nanny in New Rochelle, New York which she enjoyed very much. She was last employed with Deseret Book Company working in Church Distribution and Mormon Handicraft. She had great talents. She freely gave items she made to family and friends. She love her “Kitty”. Kathlene was a faithful member of The Church of Jesus Christ of Latter-day Saints serving in various capacities, in music, Relief Society, and as a loving Primary teacher. Kathlene and William served as workers in the Salt Lake Temple. She was well loved by family and friends alike and will be missed by all. Kathlene was preceded in death by her mother, and a brother, Philip Jay Andreasen. Kathlene is survived by her loving husband and also by her father, three brothers, Mark Frank Andreasen (Tamara), David Marvin Andreasen (Teri), and Nathan “Willie” Andreasen, also in-laws James Andrew Wallace Jr. (Sheila), John Thomas Wallace (Bonnie), Kathleen Wallace and many nieces and nephews and grand nieces and nephews. Viewing 6:00-8:00 pm Monday, Dec. 11 and 10:00 am Tuesday, December 12 at Southgate Ward 2702 So Main, Salt Lake City. Funeral services will be 11:00 Tuesday. Burial will take place later that day in the Benjamin City Cemetery.

The family of Kathlene Andreasen Wallace created this Life Tributes page to make it easy to share your memories.