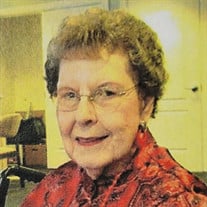 Kathryn (Kae) June Munk Ballard 96, of Spanish Fork, Utah passed away on October 24, 2021, to be reunited with loved ones. She was born to Katy May Taylor and Jacob Kenneth Munk on June 28, 1925 in Castle Gate, Utah. When she was 24 months old, her family moved to Price, Utah. When she was nine years old, her family moved to Salt Lake City, Utah. She graduated with high honors from West High School. She was sealed to Leland Dean Ballard in the Salt Lake Temple on December 21, 1945. They had three sons, Larry Lee, David Roger and Jay Brian. She enrolled and attended the University of Utah for two years. In 1950 the family moved to San Pablo, California. After recovering from an emergency operation, she soon enrolled in the San Francisco State University. After two years, she received her BA diploma in Education. Kae then taught elementary children for twenty-five years. In 1987 Kae and Dean returned to live in Orem, Utah. She was very civic minded. She was active in the Provo Women’s Council, Orem Women’s Club, Daughters of the Utah Pioneers and the Madsen Memorial Choir. While still living in California, Kae was called to be the music director in The Church of Jesus Christ of Latter-day Saints. She has been the conductor of the hymns in five different LDS chapels. When she moved to Spanish Fork, Utah, she was appointed as the music coordinator and director in the Legacy House Branch. Kae moved from Orem, Utah to Salem, Utah in 1999 after the death of her husband Dean Ballard who died April 5, 1995. She lived with her oldest son and his wife Diana Black Ballard for 15 years. After an auto accident her life changed, motivating the move into the Legacy House in Spanish Fork, Utah, in 2013. She was the mother of three boys, 13 grandchildren and 33 great-grandchildren. She compiled photo albums for herself, her sons and her 13 grandchildren. Katheryn’s motto was, “Just put one foot in front of the other foot and never look back.” This was the ethic she took as she became a member of the Spanish Fork Senior Center and enjoyed mingling with friends and participating in the choir. One evening at the Center, she received a plaque from RSVP (Retired Senior Volunteer Program) in recognition for 30 years of volunteer service. Kathryn loved her Father-in-heaven and her Savior Jesus Christ. She was a dedicated member of The Church of Jesus Christ of Latter-day Saints. She served in many callings including Relief Society Counselor, Visiting Teacher, Chorister and Choir Director. She was preceded in death by her parents, husband and her siblings: Sylvan, Bert, Hannah, Ethan and Betty Munk. A very special thanks to all in the Legacy House for the kind and compassionate service you gave our mother, Kae.

Kathryn (Kae) June Munk Ballard 96, of Spanish Fork, Utah passed away on October 24, 2021, to be reunited with loved ones. She was born to Katy May Taylor and Jacob Kenneth Munk on June 28, 1925 in Castle Gate, Utah. When she was 24 months... View Obituary & Service Information

The family of Kathryn June Munk Ballard created this Life Tributes page to make it easy to share your memories.