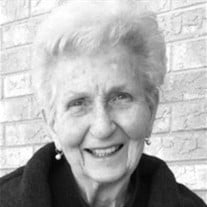 Kathryn Christensen Gardner, 88, died March 26, 2018, at home in Orem, Utah, at the side of her husband of more than 51 years, Brigham Delworth Gardner. Kathryn and Del had survived a catastrophic automobile accident 3 1/2 years earlier and were cared for in their home by their daughter Jeanmarie. Kathryn, the youngest of eight, was born August 21, 1929, in Provo, Utah, to Myrtle Farnsworth Christensen and Judge Albert H. Christensen. Kathryn was known for her passion for education and her compassion for others. She taught elementary school after graduation from Brigham Young University in Provo and Lincoln High School in Orem. She earned a Master of Arts in Instructional Media and Library Sciences from Indiana University and was an assistant professor at Utah State University for six years. She lived in several states, primarily Utah and California, and traveled the world, including the former Soviet Union during the Cold War and multiple trips to Europe and Japan. She and Del taught in Beijing, China, for a year after his retirement from BYU. She opened their home with more than 50 students at various times and was instrumental in helping an extended family of Cambodian refugees to resettle successfully in the U.S. after they fled their war-torn country in the 1980s. She loved gardening and attending concerts and plays; she was active in the LDS church, organizing and directing many music programs through the years. She is sorely missed by family, friends and neighbors. Kathryn is survived by Del, 89, her second husband, and all seven children in their blended family: Brigham Gardner, Naunie Marie Gardner, Bruce Gardner, Paul Todd, Peter Todd, Jeanmarie Todd, and Phillip Todd, plus 13 grandchildren and 8 great-grandchildren. She was preceded in death by her first husband, Albert Charles Todd, Jr., her parents, and siblings. Services will be held Monday, April 23, at the Cascade 1st Ward at 481 E. Center Street in Orem, at 11 a.m. Viewings will be 9:30-10:45 that morning and 5-7 p.m. the night before. Please share memories, condolences and photographs of Kathryn at www.serenityfhs.com.

Kathryn Christensen Gardner, 88, died March 26, 2018, at home in Orem, Utah, at the side of her husband of more than 51 years, Brigham Delworth Gardner. Kathryn and Del had survived a catastrophic automobile accident 3 1/2 years earlier and... View Obituary & Service Information

The family of Kathryn Christensen Gardner created this Life Tributes page to make it easy to share your memories.