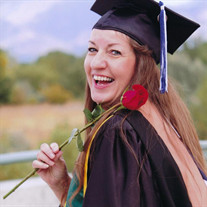 Kathryn Kirk, age 63, passed away surrounded by her loved ones on August 25th, 2019 at her home in Taylorsville, Utah. She was born on January 5, 1956 to the late Nelda Warner and late Spencer Warner. Kathy grew up in Midvale, Utah until, at the age of 18, she married Robert Watson on June 14, 1974 and started her newly married life in Murray, Utah. Together, they studied martial arts and competed extensively on a local, state and national level. Following divorce in 1989, Kathy worked at the State of Utah, Child Nutrition and Department of Education for a few years before she met William Brian Kirk and married him on June 5, 1992 in Las Vegas. Following their marriage, they bought a fixer upper in Taylorsville and opened a dog kennel and dog grooming business in Brickyard Plaza, Salt Lake. Kathy, always the diligent student and industrious worker, managed to graduate college with two Bachelor’s and an MBA with a dual emphasis in Business Administration and Human Resources from Columbia College while having shifts as a mother, helping run the family business and working full time for the State. Following her graduation, she moved into a new position at Mountainland Headstart, where she worked as the Human Resources Director until she could no longer fulfill her duties due to illness. Kathy loved traveling and enjoying the company of her grandchildren. Always pragmatic, she preferred the quiet life of book pages, caring for her garden and a stroll through her neighborhood. Nor could she pry herself from a well-written murder mystery novel with a dog on her lap. Kathy was adamant that everyone was treated equally. She would go the extra mile to help others have everything they earned and deserved. Kathy always went out of her way to help others when needed. Everyone who knew her will miss her. Kathy leaves behind her husband William Brian Kirk, children Justin Robert (Andrea) Watson, Travis James Watson, Alex Brian Kirk; grandchildren Quentin Robert Watson, Conor Von Watson; siblings Ray William (Cynthia) Warner, Louise Warner (sister-in-law), Rosa Ellen (Mike) Pipkin, Garth Spencer Warner, Noreen (David) Thur, Esther Irene Thomas, Ralph Charles (Regana) Warner, Glade LeRoy (Renee) Warner, Joyce Wayman, Merril Joseph (Leslie) Warner; many nephews, nieces, aunts, and uncles. She was preceded in death by father, Spencer Ray Warner; mother, Nelda Mae Smith Warner; brother, John Wesley Warner; and sister, Aleta Mae (Tom) Jessop. We would like to extend a special thank you to the staff at LDS Hospital Oncology, Intermountain Home Hospice and Beehive Senior Care. A Celebration of Life for Kathy will take place on Friday, August 30, 2019 at the LDS Church located at 4850 S 3495 W, Taylorsville, Utah 84129 from 10:00AM-12:00PM, followed by interment at the Sandy City Cemetery, 700 East 9000 South.

Kathryn Kirk, age 63, passed away surrounded by her loved ones on August 25th, 2019 at her home in Taylorsville, Utah. She was born on January 5, 1956 to the late Nelda Warner and late Spencer Warner. Kathy grew up in Midvale, Utah until, at... View Obituary & Service Information

The family of Kathryn Kirk created this Life Tributes page to make it easy to share your memories.

Kathryn Kirk, age 63, passed away surrounded by her loved ones...