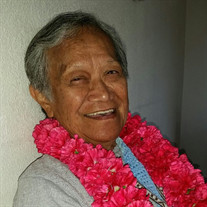 Keala K Espinoza, age 79, died after battling pancreatic cancer on February 2, 2016, in Imperial Beach, CA. Keala has been reunited with her husband, Frank Espinoza of Meridian, TX, who passed away in a car accident back in June, 1964. She is survived by her Children and their spouses: Randy Espinoza of Salt Lake City, UT. Russell and Janet Espinoza of Imperial Beach, CA and Carol Espinoza of Las Vegas. NV. Her Grand-children and their spouses: Jamilynn Craft and Brian Battease of Las Vegas, NV. Wade and Terry Craft of Hamilton, MT. Amanda Craft and Mark Andrews of Las Vegas, NV. Katrina Espinoza of Provo, UT. And Jade Espinoza of Imperial Beach, CA. Her Great Grand-children: Mercaediez Craft, Jrake Mann, Shaylee Craft, Dominick Andrews, Kamakani Battease, Wyatt Craft Keala Kamealoha Aikau was born in Wailuku, Maui, Hawaii on June 2, 1936 to Thomas Hewahewa Aikau and Keala Kaaihue Aikau. She graduated with the class of ’54 from Baldwin High School in Maui. She soon joined the United States Army and served during the Korean War. She was stationed at Fort Benning GA and this is when she met Frank Espinoza. After the Army she attended Brigham Young University in Provo Utah. A couple years later she traveled to Meridian TX and married Frank in 1958. She and Frank settled there in Meridian until he passed away. Pregnant with her unborn son, she moved back to Hawaii to be with her family. Now with her little family of 4, she settles in Honolulu where they grow up to love the islands. In late 1982 she received a job offer at Brigham Young University and moves to Provo Utah. Her 40+ years of working as a secretary in many different job situations and location brought her a lifetime of success. She lived in Imperial Beach CA at St James Plaza for the last 13 years and gained many friendships that she truly considered them all as family. She also loved to volunteer in her Imperial Beach community like serving as President of the Senior Club and the Sand Castle Days. Being a very devout Christian and a member of the Church of Jesus Christ of Latter Day Saints, the gospel brought her peace and joy especially knowing where she came from, why she was here and where she was going. Her faith in Jesus Christ and our Father in Heaven made her smile and made her love life to its fullest. She had a BIG heart which was filled with kindness and the “ALOHA” spirit. She will be missed by many but she left us with a huge example on how to “love one another”. ALOHA Keala until we meet again!! FUNERAL FRIDAY February 12, 2016 @ the Church of Jesus Christ of Latter Day Saints, 1515 Elder Ave, San Diego CA 92154 9AM -10:30AM Viewing 10:30AM - 11AM Family Prayer 11AM - 12PM Service in the Chapel 12:30PM - 2PM Life Celebration Reception BURIAL SATURDAY February 13, 2016 @ Orem City Cemetery, 1520 North 800 East, Orem UT 84097 2PM - 3PM Graveside Service 4PM - 8PM Aloha 'Oe Luau Condolences and cards can be mailed to: C/O Keala Aikau Espinoza 1000 Delaware St Imperial Beach CA 91932

Keala K Espinoza, age 79, died after battling pancreatic cancer on February 2, 2016, in Imperial Beach, CA. Keala has been reunited with her husband, Frank Espinoza of Meridian, TX, who passed away in a car accident back in June, 1964. She is... View Obituary & Service Information

The family of Keala K Espinoza created this Life Tributes page to make it easy to share your memories.