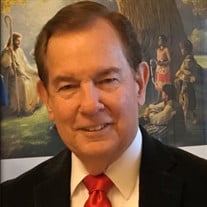 Kenneth (Ken) Clyde Hoagland, (72), a resident of Draper, Utah, passed away November 24, 2020 due to medical complications. Ken was born on January 28, 1948 to Clyde Roy Hoagland (Hoagy) and Dorothy Ann Thomas Hoagland (Dot) in Los Angeles California. Being a faithful member of the Church of Jesus Christ of Latter-day Saints, and following in his father’s and brother’s footsteps, Ken served a mission for the church from March 1967 – March 1969. Ken served and loved the people of Scotland while he taught them about our Lord & Savior Jesus Christ. Ken also gained a greater love for his pioneer ancestors (Cunningham) who came from Scotland to the Salt Lake Valley, as new members of the Church. As a young man Ken achieved the rank of Eagle Scout within The Boy Scouts of America, the highest accomplishment a Boy Scout can achieve by the age of 18. Upon his return from his mission in 1969, he became more fully invested in the Boy Scouts of America and as a Scout Leader, and helped several young men also achieve the rank of Eagle Scout. Ken realized how important the life-skills he acquired through the scouting program and in serving a mission developed him as a man, and desired to encourage and help others accomplish the same. Ken always had a nurturing heart and a desire to help others, and his heart broke for those with less-involved parents and for those young men who struggled, both in life and with their advancement through the scouting program. Ken was recognized by The Boy Scouts of America for these selfless efforts when he was presented the highest award given to scout leadership, the Silver Beaver Award. Ken was a registered Boy Scout for 52 years, and proudly wore his “50 year” scout pin. Two of Ken’s sons (Brian and Christopher) achieved the rank of Eagle Scout with Ken’s help, and to date 3 of his grandsons (Cameron Hoagland, Caleb Winfree, and Jaden Rodriguez) are also Eagle Scouts. In 1974 while working for Redway Truck and Warehouse Company, his family’s business, Ken Married Sheri Ann Heim, and together they had four children. Being a great father instantly became the priority in Ken’s life; spending quality family time and providing good memories for his kids was of great importance to him. Ken and Sheri divorced in 1983, but they remained constant and loving providers to their children. Ken remained single for several years while focusing on his children and career, but in 1995 Ken married the love of his life Cyndi, in the LDS San Diego Temple on August 4, 1995. As a bonus, Ken also gained three additional children; whom he unconditionally loved, and selflessly sacrificed for. It is because of the intentional love and nurturing provided by both Ken and Cyndi, that the Hoagland-Winfree blended family became just that, a family. It never mattered for a second whose children were whose, and unconditional love abounds between all members of this family. Ken was an artist and loved to draw, sculpt, and build things. He was very detail oriented and took pride in doing his best at any task he (or his children) embarked on. Ken had early aspirations of using his artistic talents by becoming an architect, but his job and leadership experience and love of people lead him into a career of accounting and business management for several companies. Along the way he started a few of his own businesses including the current non-profit organization he started with Cyndi, CFH Group, which appropriately stood for “Center for Hugs”. Besides Ken’s love of the outdoors, nature, camping, and fireside guitar playing, Ken also thrived on anything that had to do with the sun and water. Swimming, water-polo, boating, waterskiing, sun-bathing and even snow skiing were some of Ken’s favorite activities, and he made a point to introduce them and several others into the lives of his family. If there were a “Silver Beaver” award for being a great husband, father, grandfather, brother, and friend, Ken Hoagland would have won it hands down, even though his time with all of us has unfortunately been cut short. Ken leaves behind his wife of 25 years, Cynthia Ada Wade Winfree Hoagland (Cyndi), his four biological children: Brian Neil Hoagland (Melissa), Amber Renee Rodriguez (Isaac), Erin Nicole Brassfield (Jason), Neisha Michelle Pace (Gene); and 17 biological grandchildren. Equally loved and adored as his own, Ken also leaves behind Cyndi’s three children: Jonathan T. Winfree (Jared Unsell), Christopher D. Winfree (Paula) and Dianna Danielle Ogden (Michael), and 9 more beautiful grandchildren. Ken is also survived by his brothers Dennis (Mary Ellen) Hoagland, Robert (Alma) Hoagland and his sister Jana (Del) Goehring.

The family of Kenneth Clyde Hoagland created this Life Tributes page to make it easy to share your memories.