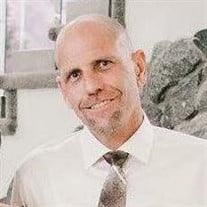 Kenny Jeffs, age 52, passed away on December 15, 2017 in Sandy, Utah. He was born October 10, 1965 in Logan, Utah. Son of Kenneth (Dick) and Joyce Jeffs. He grew up in Sandy and graduated from Alta High School in 1984. Kenny had a great sense of humor and loved to make people laugh. He worked for many years as a tree trimmer and was proud to have obtained his arborist certificate. He also worked alongside his Grandpa Price and several uncles doing cabinetry work. He made beautiful items out of wood and many of our homes are decorated with his handiwork. He could fix anything and was willing to help anyone in need. Kenny adored his two beautiful daughters Kendra (Anthony) and Kylie (Brian). He was so proud of the amazing women they have become. He was thrilled when he became “Pawm” to his little minions (grandsons) Mason, Bentley and Kash. They loved to play with him and were always so excited to see him. Another highlight of his life was when he became an uncle. From the time Alex was born, Kenny referred to him as “Mister” and Alex lovingly referred to him as “Uncle Bean”. Kenny loved to come to his soccer games and other special life events. Kenny struggled for many years with addiction. He longed to live a sober, healthy life and we all held out hope that someday he would be able to achieve it. Ultimately, he was unable to fight any longer and was released from his pain. He is now at peace and free of his burdens. Kenny is survived by his loving parents Kenneth (Dick) and Joyce; sister Alisa White (Bob); daughters Kendra Diddens (Anthony) and Kylie Kesler (Brian); grandsons Mason, Bentley and Kash; nephews Corey White (Sara), Jordan Heaton and Alex White; his loving dog Bubba, and many more loving family and friends. He is preceded in death by his grandparents Orson and Beth Price, Fred and Edith Jeffs, and his dog Smore. The family is very thankful for all of the love and support they have received from family and friends. Funeral services will be held Friday December 22nd at the Crescent 7th ward (949 East 10600 South), Sandy, Utah. Viewing from 5:30 – 6:45 and funeral services from 7 – 8 pm.

The family of Kenneth Dean Jeffs created this Life Tributes page to make it easy to share your memories.