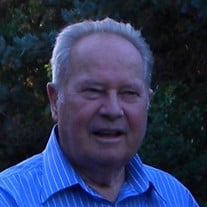 Born February 27, 1935 in Highland, Utah to Louis Ereal Day and Elizabeth Roundy. He passed away after a long fight with Heart and Parkinson’s Disease on January 23, 2018 at the age of 82. He married Nola Moulton in 1959 in the Salt Lake LDS Temple and together they had 9 Children, 36 Grandchildren and 20 Great Grandchildren. He was raised in Highland, Utah along with 3 Brothers and 3 Sisters and lived in Highland nearly his whole life. He served in the Navy Reserves for 8 years and served an LDS mission to the New England States. He graduated from American Fork High School and BYU with a Bachelors Degree in Math and Science in Education, where he competed in Football and Track. He taught Math, Science, Algebra, Physics, Chemistry, Trigonometry and Astronomy at Altamont, South Summit, and Lehi High School for 32 years. He farmed his many acres during his summers off from teaching, growing corn, tomatoes and alfalfa to sell to the community. They also received a milk cow for a wedding gift and had cows, horses and other animals for many years. He loved to travel in their motorhome, go hunting and fishing, riding horses with his kids and grandkids and many trips to Yellowstone. He had a strong testimony of the gospel of Jesus Christ and served as a Scoutmaster, Gospel Doctrine Teacher, Elders Quorum President, Ward Clerk and gave 19 years of service as a temple worker in the Mount Timpanogos LDS Temple. He served on the Highland City Council and was a Water Master for many years. Kent leaves behind his wife Nola and their Children, Todd (Stephanie) Day, April (Val) Brown, Lon (Trudie) Day, Val (Jennifer) Day, Jeran Day, Dixon (Jennifer) Day, Amber (Will) Peterson, Nolan Day. Also, his Sister Dolores (Dell) Sanders, Brother Robert (Janet) Day, Brother Loren (Gail) Hyde, Sister Debbie (Ron) Asay. He was preceded in death by his Parents, son Ryan, brother Allen and sister Patricia. We would like to thank his many caregivers at Applegate Care and Highland Glen Memory Care for the concern and kindness that he received. He will be laid to rest in the Highland City Cemetery with funeral services being held in the Highland LDS Chapel located at 10962 North 6400 West, Highland Utah on Saturday, February 10, 2018 at 11 a.m. Friends and Family may visit Friday Evening from 6 to 8 p.m. at the church and again from 9:30 to 10:45 a.m., prior to services Condolences may be sent to the family at serenityfhs.com

Born February 27, 1935 in Highland, Utah to Louis Ereal Day and Elizabeth Roundy. He passed away after a long fight with Heart and Parkinson&#8217;s Disease on January 23, 2018 at the age of 82. He married Nola Moulton in 1959 in the Salt Lake... View Obituary & Service Information

The family of Kent Roundy Day created this Life Tributes page to make it easy to share your memories.