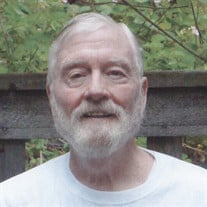 Lewis Kent Wilhelm, husband, father grandfather, brother, uncle and friend lived life with music, and humor. He was born April 2, 1943 to A. Lewis and F. Lamar Wilhelm in Salt Lake City, Utah. He passed away on November 15, 2014 in Camptonville, CA due to complications from diabetes. He served a full-time LDS mission to the Southwest Indian Mission in Arizona and New Mexico. He married Suzanne Linge in the Salt Lake LDS Temple on August 20, 1965 and together they raised 4 children. They later divorced. He started several businesses including Christmas in Montana and Christmas in Utah. He married Diane Waechter and together they started a business making and selling handmade jewelry at fairs and events across the nation. They also traveled the world together. They lived in Sun City, Arizona and in Camptonville, California. Diane passed away in September, 2014 in Arizona. Kent had musical talent, played the acoustic guitar, and loved to perform folk music including many family-favorite songs. At family reunions he would lead in songs around the campfire or wherever the family gathered. He was also a great story teller, often recounting family stories with unique details and humor. He is survived by three children: Todd (Amy) Wilhelm, Amber ( Chad ) Rawlings and Darcy (Nick) Council as well as 15 Grandchildren, two brothers Jim (Cheryl) and Doug, two sisters, Pam (Steve) Koch and Ann (Terry) Chisholm. He was preceded in death by his parents, wife Diane, brother Robert Gene Wilhelm, sister, Phyllis Crandall, by a daughter, Tonya Tenney, and by a granddaughter, Sarah Wilhelm. Funeral services will be held on November 25, 2014 at the Sandy Utah Crescent Stake Center located at 10945 South, 1700 E. Viewing will be at 10 AM followed by funeral services at 11 AM. Interment will be at Larkin Sunset Gardens in Sandy at 1950 East, 10600 South, Sandy UT. Please share condolences at www.serenityfhs.com

Lewis Kent Wilhelm, husband, father grandfather, brother, uncle and friend lived life with music, and humor. He was born April 2, 1943 to A. Lewis and F. Lamar Wilhelm in Salt Lake City, Utah. He passed away on November 15, 2014 in Camptonville,... View Obituary & Service Information

The family of Kent Wilhelm created this Life Tributes page to make it easy to share your memories.