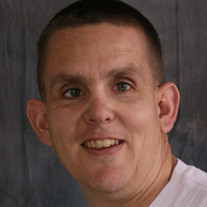 Kim Dean Jenson “Uncle Kim” Washington Terrace: Our son, brother, uncle, and friend, Kim Dean Jenson passed away peacefully at home from a brain tumor. As usual, Kim was surrounded by family and friends. He was born August 3, 1969, in Ogden, Utah, to Dean R. Jenson and Kathleen Chambers Jenson. He lived his whole life in Ogden, graduating from Bonneville High School in 1987. He worked for 7 years at Albertson’s where he had a great friend and boss, Craig;, and for the past 15 years he worked at Autoliv where he was a favorite of his coworkers. He loved to go camping and 4-wheeling, but not fishing. He had a talent for creating art designs that were amazing. Kim had a strong testimony of the gospel of Jesus Christ and was a faithful member of the Church of Jesus Christ of Latter-day Saints, serving in many callings including Membership Clerk and Single Adult Leader. Kim served the LDS Church in the Dearborn/Detroit Michigan Mission. Kim was loved by all who met him. To be around Kim was to know true friendship, love and loyalty. In the words of Winnie the Pooh, "How lucky I am to have something that makes saying goodbye so hard". Kim brightened a lot of people's lives daily and he had a profound affect on all who knew him. A special thanks to Dr. Dennis Winters and Hospice, especially Vickie. He is survived by his parents, Dean and Kathy Jenson; brothers Douglas (Jen) Jenson of San Diego, CA, and Keith (Deb) Jenson of Ogden, Utah. He was the favorite uncle of Carlee, Tyler, Sam, Josh, Jake, Alli, and Dory. He is also survived by many loving Aunts, Uncles, and Cousins who will sorely miss him. He was preceded in death by brother David, Aunt Bonnie, and both sets of grandparents. Funeral services will be held at the Washington Terrace Second Ward LDS Chapel 4210 S. 300 W. on Wednesday, June 25, 2014 at 11 am. Friends may visit with family from 6-8 pm, Tuesday, June 24, 2014 and Wednesday, June 25, 2014 from 9:30-10:30 prior to services at the church. Bishop Clatterbuck will officiate. Interment at Smithfield City Cemetery, 300 E. Center Street. Smithfield, UT.

The family of Kim Dean Jenson created this Life Tributes page to make it easy to share your memories.