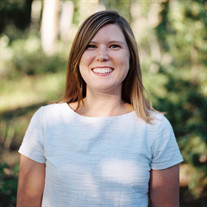 Kristen Marie Burns died on November 3, 2019 at age 31 after a far-too-short battle with cholangiocarcinoma. She died peacefully in her home in Salt Lake City, UT surrounded by family. She was born in Sioux Falls, South Dakota to Deane and Robert Burns. She was a remarkable woman, known equally for her intelligence and fun-loving spirit. She excelled at Washington High School before going to Tufts University for a degree in engineering, where she graduated cum laude. She went on to become a certified industrial hygienist (CIH), and was the first female CIH in South Dakota. She was an accomplished professional in the safety field, and took great pride in her work at GeoTek Engineering in Sioux Falls, and later at Dominion Energy in Salt Lake City. In her personal life she was a woman of simple pleasures – she loved her garden, long walks, freshly poured concrete, a cold beer, time with friends, and a good joke. She didn’t like to sit still, and was always organizing an adventure. She loved to travel and was eager to explore the world around her. She is survived by her wife and partner of nearly 10 years, Raeann Bourscheid, as well as her grandparents George and Joanna Martel, mother Deane Berg (Jim), sister Carrie Biondi (Luke), her beautiful niece and nephew, London and Beck Biondi, and her shaggy mutt, Izzy. She will also be dearly missed by her in-laws – John, Ellen, Sarah, and Caroline Bourscheid; her aunts and uncles – Jim Burns, Greg and Gloria Martel, Gary and Nancy Juvinall, Kim and Larry Ratner, Glenn Juvinall; and the close circle of friends with whom she grew up and that she considered family. She was predeceased by her father, Robert T. Burns in 2002. A memorial service will be held at Fernson Brewery (1400 E Robur Dr, Sioux Falls, South Dakota 57104) on Wednesday, November 13 at 5:00pm. A smaller service will be conducted in Salt Lake City at a later date. Kristen always thought the impermanence of flowers made them an impractical gift (she was very pragmatic like that), so instead please consider a contribution to the Cholangiocarcinoma Foundation (www.cholangiocarcinoma.org), an organization that brought Kristen much comfort in her last year.

Kristen Marie Burns died on November 3, 2019 at age 31 after a far-too-short battle with cholangiocarcinoma. She died peacefully in her home in Salt Lake City, UT surrounded by family. She was born in Sioux Falls, South Dakota to Deane and... View Obituary & Service Information

The family of Kristen Marie Burns created this Life Tributes page to make it easy to share your memories.