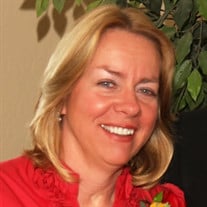 Krysti Jane Pyles, age 60, slipped away from mortality very peacefully on April 27, 2020 in Lehi, Utah. She was born in Salt Lake City, UT to Don Ray Roberts and Mary Jane Estey Roberts. She was married to James E. Pyles. They were married on May 18, 1979 and were later sealed in the Salt Lake Temple. Our feisty, spirited Krysti packed more into her life of 60 years than most. She was always an organized, no-nonsense doer. Her whit and tenacity will be missed by us all. Of all the titles she held, her most treasured one was that of Mother and Grandma Krysti. She was in the details of all their lives. She was the biggest fan of her boys and all their sports and activities, doing all she could to be at each one. Krysti and Jim traveled often to spend time with family scattered nationwide. They enjoyed traveling and one of her fondest places was the Alaskan loop. Krysti and Jim spent most of their years in Sandy, UT raising their family. She was well known as a dominant force in the scouting world and influenced numerous lives of young men who later achieved their Eagle Award, including her four sons. She was a natural leader and advocate for the scouting program. Krysti also served in Primary, Young Women’s, and Relief Society leadership positions at the Ward and Stake level. A highlight of their lives was serving as full time missionaries in the Philippines Quezon City, Public Affairs Mission 2013-2015. They made many long-lasting friendships with fellow missionaries that continued throughout her life. She also served a mission at the Deseret Industries, along with her mother. Krysti was a friend to many of all ages. She always had food available and enjoyed a house full of people around her. Playing all types of games was a favorite pastime, always being the fiercest competitor. She made a valiant effort to build relationships with all eight of her boys and always made time for each of them. Krysti is survived by her husband, Jim of 40 years, sons Kevin (Kammi) of Eagle Mountain, UT, Nicholas (Melinda) of Peachtree City, GA, Bradley (Lauren) of Eagle Mountain, Matthew (Danielle) of Rexburg, ID, Eric (Kim) Gilbert, AZ, John (Tammy) of Chagrin Falls, OH, David (Christine), Gilbert, AZ and Ryan (Rita), Mesa, AZ. Also survived by 32 grandchildren and one great grandchild, brothers Jerry (Barb) Roberts of Las Vegas, NV, Ron (Linel) of West Valley City, UT, and sister Jackie (Steve) Riley, of Sandy, UT. She is preceded in death by her parents and infant son, Aaron. A private graveside service for family only (thanks Covid!) will be held on Wed., April 29, 2020. In lieu of flowers or donations Krysti requested you go do something on your Bucket List in her honor!

Krysti Jane Pyles, age 60, slipped away from mortality very peacefully on April 27, 2020 in Lehi, Utah. She was born in Salt Lake City, UT to Don Ray Roberts and Mary Jane Estey Roberts. She was married to James E. Pyles. They were married... View Obituary & Service Information

The family of Krysti Jane Pyles created this Life Tributes page to make it easy to share your memories.