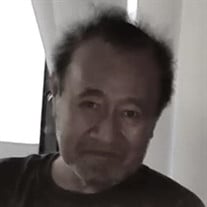 Kuli ha’apai Faleafa passed away April 22, 2016, at his home in Provo, UT. He was born December 12, 1943, in Ha’avakatolo, Tongatapu, Tonga, to the parents of Hufanga and Vika Faleafa. He met his future bride, Susana Latu ‘Onevai, when she knocked on his door while serving a mission for The Church of Jesus Christ of Latter-day Saints. They married in Temple View Hamilton in New Zealand. Together, they served a couples mission in Tonga, serving their native people. Their oldest son was born while they were serving the Lord. They were later blessed with 3 more sons and 2 daughters. Kuli took his family to the U.S., where he began his education at Brigham Young University in Hawaii, majoring in mathematics. They moved to the mainland and settled in Provo in the 1990s. Kuli retired from Alexander Digital Printing Company in November of 2014 and spent the remainder of his years at his wife’s side until he passed away peacefully in his sleep. Kuli is preceded by Hufanga Faleafa (father) followed by his sister, Sela Fipe Faleafa Tonga, and Hungaloupea (son), who passed away in infancy. He is survived by Tahaafe (Son, Provo, UT), Motau and his wife Esther (Son, Payson, UT), Kuli Jr. (Son, Provo, UT), Linda and her husband Colin (Daughter, SLC, UT), Marie (SLC, UT), and 9 grandchildren. Kuli was very loved and he will be sorely missed by his family and friends, who are grateful for his loving example in this life. Funeral Services for Kuliha’apai Faleafa will be on May 12, 2016, at The Church of Jesus Christ of Latter-day Saints at 1090 W. 1020 S., Provo, Utah UT 84601. There will be a viewing from 8-11:30 a.m. followed by services from 12:00-1:00 p.m. Kuli will be interred at the Provo Cemetery, 610 South State St., Provo, UT 84606. Special thanks to Peni Malohifo’ou and Serenity Funeral Home for making Dad’s funeral arrangements and Bishop Havea and the Relief Society for all their help. If anyone has any memories and/or condolences they would like to share please go to www.serenityfhs.com. Thank you!

The family of Kuli Ha'apai Faleafa created this Life Tributes page to make it easy to share your memories.