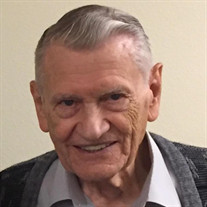 LaMar Rufus Frandsen passed away on April 7, 2022 in Holladay, Utah. LaMar was born on March 1, 1933 in Rexburg, Idaho, to Lloyd Victor Frandsen and Sarah Columbia Speas and was the eldest of six children. LaMar grew up in the rural communities of Basalt and Goshen Idaho. He graduated from Firth High School in 1951, where he was the student body president. He was also a member of the debate team which he excelled at. He also enjoyed scouting and earned the rank of an Eagle Scout. After high school, he attended Ricks College until he accepted a call to serve a mission for The Church of Jesus Christ of Latter Day Saints in the North Central States Mission from 1953 to 1955. After serving as a missionary, LaMar attended Brigham Young University where he attended school until he was drafted into the United States Army from 1956 to 1959 at the US Army Base in Fort Lewis, Washington. Upon completion of his service in the Army, he resumed his studies at BYU and graduated with a Bachelor of Science in 1960. Upon graduating, he accepted a teaching position at Idaho Falls High School. In 1961 he met and dated the beautiful Sharon Jensen. On March 8, 1963 they were married in the Idaho Falls Temple of The Church of Jesus Christ of Latter Day Saints. Later that same year LaMar and Sharon moved to Moscow, Idaho where he attended the University of Idaho. A year later he was offered a teaching position at the high school in Clarkston, Washington. During this time he was the debate team coach where his team took first place in the state of Washington which he was very happy about. In 1965 LaMar was teaching early morning seminary and served as the stake young men's president. Later that year he was called as the Second Counselor in the Lewiston First Ward bishopric. Then in January of 1966 LaMar and Sharon welcomed their first child David LaMar into the world. In 1967, LaMar was offered a position at Utah State University as the first Foreign Student Advisor. In 1970, they welcomed their second child Shahla Lee into their family. After 25 years, LaMar retired as the Director of International Student Services at USU where he enjoyed the interaction with many students and cultures which enriched the lives of him and his family. Upon retirement, LaMar and Sharon moved to the Salt Lake area and later relocated to their current residence in Draper, Utah. He had 2 children, 6 grandchildren, and 2 great-grandchildren. He is survived by his wife Sharon of Draper, son David (Laura) of Nibley, daughter Shahla (Nathan) of West Jordan, brother Rulon-deceased (Norine) of Salt Lake City, brother Vearle Kay-deceased (Diane) of Shelley, brother M. Kent (Patricia) of Providence, brother Ronald (Gae) of Brigham City, and sister Karen (Joel-deceased) of Pocatello. Funeral arrangements provided by Serenity Funeral Home. A viewing will be held Saturday April 16, 2022 from 9:30 a.m. to 11:30 a.m. at the LDS Church located at 11626 South 300 East, Draper, Utah. Funeral services will follow and begin at 12:00 p.m. Services may be viewed via the following link: https://sites.google.com/view/c6meetings A graveside service will be held on Monday April 18, 2022 at 11:00 a.m. in the Firth City Cemetery located at 622 East 750 North, Firth, Idaho.

LaMar Rufus Frandsen passed away on April 7, 2022 in Holladay, Utah. LaMar was born on March 1, 1933 in Rexburg, Idaho, to Lloyd Victor Frandsen and Sarah Columbia Speas and was the eldest of six children. LaMar grew up in the rural communities... View Obituary & Service Information

The family of LaMar Rufus Frandsen created this Life Tributes page to make it easy to share your memories.