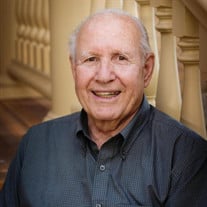 Topic: Larrie Oreno - Funeral Service Time: Sep 10, 2021 11:00 AM Mountain Time (US and Canada) Join Zoom Meeting https://us02web.zoom.us/j/81472693175?pwd=eGQ3MzNmUng0SWw5RnQxbzhKQkF6dz09 Meeting ID: 814 7269 3175 Passcode: Serenity Larrie D Oreno, age 86, passed away on August 30, 2021 after a well fought battle with cancer. He was born in the South Salt Lake home of his parents, John Peter & Norma Jones Oreno, on October 29, 1934. He married his sweetheart, Shirley Ann Burbank on April 23, 1952 and later they were sealed for time and all eternity. They were married for 62 years before she died in 2014. He has missed her and has looked forward to the time they would be together again. Larrie was an active member of the Church of Jesus Christ of Latter-day Saints and served in many callings throughout his life. He was President/Owner of Oreno Building Corporation and loved going to work every day. He said it wasn’t work when you loved what you are doing. He loved the crew he employed and worked alongside them as much as he could. Many had a hard time keeping up with his pace as he ran everywhere he went. He was truly one of the happiest and most positive people around. He was a friend to everyone, but his most treasured friends called themselves “The Gang” and have been getting together since High School. He loved to travel and saw many amazing countries, cities, and jungles of the world, but his favorite place was on his boat named “His Necessity.” Survived by his children, L. Brent (Michele) Oreno, Cheryl Gillett, Kathy Oreno, Donna (Todd) Froerer, 14 Grandchildren and 17 Great Grandchildren. Sisters, Arlene Durham, Karen Fairbanks, and Brother Eugene Oreno. Larrie was preceded in death by his wife, Shirley, his Parents, John Peter and Norma Oreno, his Brothers John Peter Jr and David Oreno. A viewing will be held Thursday, September 9th from 6-9 pm at the West Jordan Stake Center located at 2666 W 7000 S. A brief viewing will be held from 9:30 – 10:30 am before the funeral. Funeral Services will be held Friday, September 10th beginning at 11:00 am at the same West Jordan Stake Center. Interment will take place at Larkin Sunset Gardens in Sandy. The family wishes to express a special thanks to Megan with Homespire, Stephanie, Katrina and especially Nui at Brio Hospice. We are forever grateful for Nui’s patience and gentle care. We also thank the staff at BeeHive House of South Jordan for their care the last few weeks of his life. Please share memories and condolences at WWW.serenityfhs.com.

The family of Larrie D. Oreno created this Life Tributes page to make it easy to share your memories.