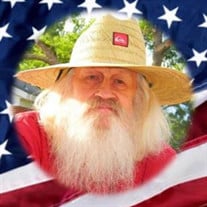 Sgt. Larry Vern Anderson, a USMC Vietnam veteran, passed away March 25, 2021 after months of battling brain cancer. He was born on February 4, 1950 in Ogden, Utah to Raymond and Wilma (Meadows) Anderson. He grew up in Clearfield, Utah, where he went to school and graduated from Clearfield High. He was always known for his witty sense of humor and had many classmates with whom he was still in contact with. Larry enlisted into the United States Marine Corps on December 3, 1968 and was stationed in Okinawa, Japan during the early 1970's. He served four years active duty before transferring to the reserves on March 1, 1972, where he continued his service until October 24, 1974. After retiring from the USMC, Larry attended a New Year's party not knowing that he'd meet the love of his life, Frances Renee Wilson, that night. Larry and Fran only dated a few short months before they tied the knot in a small, intimate wedding on June 23, 1977. In the coming years, Larry and Fran not only welcomed their daughter, Spring, but also took in their grandchildren, Chris & Nikki, and raised them as their own. In the beginning of their marriage, Larry and Fran lived in the Sunset, Utah area where Larry had gotten a job with the Union Pacific Railroad as a brakeman and was studying to become an engineer. He had hoped to gain a more stable work schedule, so when the opportunity presented itself, Larry took the transfer and moved their family to Dillon, Montana. Larry suffered an injury while working and retired early from the Union Pacific Railroad in 1999. In Dillon, Larry and his family made life-long friends. He also took advantage of what Montana had to offer and enjoyed his favorite past-time, fishing. As the years passed, his children grew into adults, and he became a grandfather. One thing about Larry that never failed, was that he absolutely loved his grandchildren & great-grandchildren. They could count on him to be where ever they needed him. Whether it was a baseball game, graduation, birthday party, or to just proudly stand watch while his oldest followed in his footsteps and became a Marine, just like his grandpa. Not only did he show up, but he was there, camera in-hand, and ready to take pictures so he could show off their accomplishments. In 2004, tragedy struck. Larry and Fran's home burned down with almost everything they owned still inside. So, they packed up their belongings and moved back to Ogden, Utah. After the passing of his wife in April of 2020, Larry was diagnosed with an aggressive form of brain cancer. Like a true Marine, he fought against all odds and never gave up, but his body could not endure. Larry is preceded in death by his parents, his wife Frances, his daughter Nichole Skradski, his step-children: Ronnie & Becky and his brothers: Gary Anderson, Dan Anderson, Tim Anderson & Ronnie Andersen. Larry is survived by his daughter Spring (Scott) Zimmerman, his son Chris (Kami) Dittmer, his brother Dennis Anderson, his step-children: Mike & Tracey and many nieces, nephews, grandchildren, great-grandchildren, great great-grandchildren, friends, & loved ones. In lieu of flowers, the family requests that donations be made to help pay for his final expenses on the GoFundMe page. A viewing will be held from 6 PM - 8 PM on Monday, April 5, 2021 at Serenity Funeral Home 13863 South 2700 West Bluffdale, UT 84065 We'd like to say a special thank you to Symbii Home Health & Hospice, his nurse's aide Candice, and nurses Autumn & Alisa for everything they done to help Dad. Semper Fidelis - " For I was, am and shall forever be, a United States Marine!"

Sgt. Larry Vern Anderson, a USMC Vietnam veteran, passed away March 25, 2021 after months of battling brain cancer. He was born on February 4, 1950 in Ogden, Utah to Raymond and Wilma (Meadows) Anderson. He grew up in Clearfield, Utah, where... View Obituary & Service Information

The family of Larry Vern Anderson created this Life Tributes page to make it easy to share your memories.