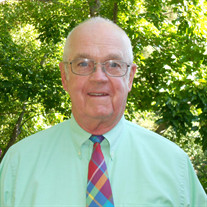 Larry Culberson, 70, entered into the presence of his Lord and Savior on October 31, 2014, in Sandy, Utah. He was born in Pana, IL, on March 10, 1944 to Robert and Doris Culberson. He married Carole Pauley in Peoria, IL, on September 4, 1965. They were the proud parents of Nathan (Tracy) of Tulsa, OK, Joel (Veronica) of Topeka, KS, Aaron (Terri) of Sandy, and Rebecca (Fred) Palfreyman of West Jordan. He earned a B.S. in Civil Engineering from Bradley University, graduating magna cum laude, an M.S. and PhD. in Civil Engineering from Oklahoma State University. As an engineer for Chicago Bridge and Iron, he worked in Texas, Chicago, Memphis, and Salt Lake City. After closing the Salt Lake plant he then worked for FMC Jetway for 17 years. He was presently employed by Tetra Tec. More important to him than his employment was his relationship with Jesus Christ. This was evident in his love for his family and friends, and in his concern for people in need. He was a member of Midvalley Bible Church, where he sang with the Praise and Worship Team, served as Deacon and Elder (Chairman of the Board), worked with children as an Awana leader (25 years), and ministered through various other responsibilities. His favorite Bible verse was Galatians 2:20. Larry umpired high school and legion baseball games for 24 years and was Chairman of the Board of CBI/Midvalley Federal Credit Union for 28 years. An accomplished pianist and vocalist, he enjoyed music, as well as spending time with his family at the cabin (Cub’s Den), and traveling with his wife. He race-walked the St. George Marathon twice. He also loved bowling, water and snow skiing, reading, and especially playing with his 16 grand-kids. Besides being survived by his wife, four children, and 16 grandchildren, his sister Nancy (Lee) Netherton lives in Siloam Springs, AR, and his brother Roger (Eileen) lives in Pana, IL. Larry was preceded in death by his parents. A celebration of Larry’s life will be held at Midvalley Bible Church on Friday, November 7, at 7:00 pm. The church is located at 13895 South 2700 West. The family thanks Gold’s Gym and Ben Anderson for their professionalism in helping Larry when he collapsed during a training session. Please share memories and condolences at www.serenityfhs.com. In lieu of flowers, the family requests memorials be sent to Midvalley Bible Church, PO Box 936, Bluffdale, UT 84065.

The family of Larry Culberson created this Life Tributes page to make it easy to share your memories.

Larry Culberson, 70, entered into the presence of his Lord and...