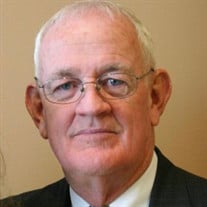 Larry Palmer - Funeral Service Time: Jan 30, 2021 10:00 AM Mountain Time (US and Canada) Join Zoom Meeting https://us02web.zoom.us/j/83700394313?pwd=Uk5TYmpCaFdrcHp0cFJ4T0tRSkYrUT09 Meeting ID: 837 0039 4313 Passcode: 129970 Larry Dee Palmer passed away on January 26, 2021, in West Valley City, Utah. During his final days, he was surrounded by his greatest treasures, his family. He was born in Logan, Utah on August 17, 1944, to Leland and Ruth Saunders Palmer. He was the second eldest of seven children. During his childhood he developed a love for fishing taught by his father and overcame the trial of polio with the love and care of his mother. Larry attended primary school in Logan and graduated from Logan High School in 1962. He then became a loyal Aggie at Utah State University and was a life-long supporter. Larry’s life was blessed with two loving sweethearts. He married Judy Forrester on October 27, 1965, in the Logan Temple. They were happily married for 16 years. After her death, he and Ruth Thompson were married on July 27, 1982, in the Logan Temple. Together they raised eight children and it was their greatest joy and legacy. Larry was a beloved son, brother, husband, father, grandfather, uncle and friend. His family called him Papa and Omie. They loved his Sunday dinners, observing his example of service, fishing by his side, and shopping with him as well as receiving surprises from the RMM. Larry loved gardening and yard work. He was a masterful landscaper. His yard and harvest were appreciated by many. He was awarded the West Valley “Clean and Beautiful Landscape” for 2020. In addition he won over 200 State Fair ribbons for his produce. His salsa and cheese balls were a favorite gift for neighbors, friends and family. Larry worked for the Church of Jesus Christ of Latter Day Saints as a Facilities Manager for 26 years. He could fix anything and everything and often came to the rescue of those needing aid. Larry lived a life of service and unbending faith in Jesus Christ. He held many church callings and loved being a Bishop because of the relationships fostered. He devoted over 40 years to the scouting program and received the District Award of Merit. His mission with Ruth to the Utah Bishops’ Central Storehouse and Welfare Square from 2012- 2017 cultivated lasting friendships and special memories. He is survived by his wife Ruth, his eight children, Rod Palmer, Rae Boren (Brady), Christine Edwards (Doug), Rex Marler (Natalie), Denise Nelson (Scott), Maxwell Marler (Krista), Kenny Palmer (Paula), JD Palmer (Lacy). Thirty-two grandchildren and eight great grandchildren. Also surviving are his siblings Woodrow Palmer (Anne), Louise Croft (Harold), Eldon Palmer (Annette), Wayne Palmer (Debbie), Annette Smith (Craig), Mark Palmer (Michelle). He was preceded in death by his wife Judy and his parents Leland and Ruth. Due to Covid-19 restrictions, a service will be held for the family Saturday, January 30, 2021, at 10 AM. The service will also be held via Zoom for those who wish to attend virtually. Thirty minutes prior to the service a link will be provided for Zoom.

The family of Larry Dee Palmer created this Life Tributes page to make it easy to share your memories.