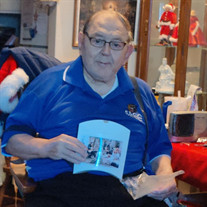 Larry LaGrand Pulley passed away peacefully in his sleep at the age of 72 in his West Valley home, January 2, 2022, after suffering through various health issue over the last few years. He was born in Salt Lake City Utah on November 13, 1949, to LaGrand and Dorothy Pulley. After spending his childhood in Salt Lake City, Utah he was called to serve in the New England states mission as an Elder for the church of Jesus Christ of Latter Day Saints. In April of 1973, after being set up on a blind date he married his sweetheart, Sharon England. They were sealed for Time and all Eternity in the Washington DC temple in June of 1975. In his 7-year military career in the U.S. Army where he was stationed in Panama, Georgia, Alaska, and Washington D.C. They welcomed their first-born child and only daughter Lisa Pulley in 1977. Larry left the Army 1978 and moved back to Salt Lake City and later to West Valley he enrolled later at in the Salt Lake Community College (SLCC), Graduating in the summer of 1990. While in School, their second born, Timothy (Tim) was born in 1988. their third and final child, Brian was born late 1991. He found a job working in the registration department for SLCC in 1990 Where he worked for over 20 years until his health complications began in 2012 and he chose to retire. Over the years he enjoyed being an active part of the community, serving in various church callings, as well as Volunteering. Some of his greatest memories and joys in life were Ushering for Temple Square in downtown Salt Lake and the LDS conference center, Volunteering for the Salt Lake 2002 Winter Olympics, and working as a professional Santa Claus over many years, (Including having his children help by dressing up as elves.) Some of his hobbies included Jigsaw puzzles and building various miniature models such as ships. He also enjoyed listening to the radio and the news as often as he could. He is survived by his wife Sharon, his daughter Lisa, sons Tim and Brian (Tiffani) His sisters Cheryl (Martin) Lora (Harold) His brothers, Rick (Susan), Scott and John and his Grand Dogs Apollo and Athena :) He is preceded in death by his Mother Dorothy and Father LaGrand and younger brother Jeffrey. By his in laws Edgar and Erma England, his Sister-in-law Susan Pulley and Brother in laws Bruce England, Earl Thompson, and Harold Franklin. As well as various other Aunts and Uncles on both sides. We are extending a huge debt of gratitude to Rocky Mountain Home Health including hospice workers, Holly, Malinda, and Jodie. Every case worker, Doctor, Nurse, and every other health care professional we have worked with over the years. Services will be held Tuesday, January 11th, 2022, At the Church of Jesus Christ of Latter-Day Saints located at 2101 west 3100 south West Valley City, Utah 84119. The viewing will be from 10am-11:45am with services starting at 12. Interment will be at the Utah Veterans Cemetery & Memorial Park at Camp William’s. 17111 1700W. Bluffdale, UT 84065 Please share memories and condolences at www.serenityfhs.com

Larry LaGrand Pulley passed away peacefully in his sleep at the age of 72 in his West Valley home, January 2, 2022, after suffering through various health issue over the last few years. He was born in Salt Lake City Utah on November 13, 1949,... View Obituary & Service Information

The family of Larry LaGrand Pulley created this Life Tributes page to make it easy to share your memories.

Larry LaGrand Pulley passed away peacefully in his sleep at the...