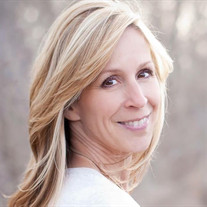 Laura (Lori) Ann Wright Smith passed away peacefully at home following a 3 year battle with ovarian cancer, surrounded by her loving family on September 7, 2018. She was born in Campbell, California on July 2, 1964 and was the third child born to Gilbert Kimball Wright and Susan Louise McLaughlin (Beus). She attended school in Santa Clara, California until she moved to Utah in 1979. She attended Orem High School, and graduated from Mountain View High School in 1982 and enjoyed two years as a Bruinette on the drill team. She studied at Utah Valley University in their nursing program, and attended Brigham Young University. Although she worked early on as a cleaning lady, a bakery assistant, and a copy center manager in Orem, Utah, she enjoyed a lifetime career in the technology field. She was employed early on by Corel then Wordperfect, moved on to Novell, Attachmate, and most recently worked as a project manager for Adobe. She had many positions and titles in her career, but most often worked in leadership and management positions, and was loved and admired by her many co-workers and peers. Lori raised four daughters, and met and married her husband, Gordon Smith on September 10, 1998 in Lehi, Utah. He brought to their marriage 3 additional daughters which she was also privileged and grateful to help raise, love and support. Lori was a member of the Church of Jesus Christ of Latter-day Saints and in addition to a lifetime of various church responsibilities, she faithfully served in Young Women and Relief Society presidency positions. Lori and Gordon were sealed in the St George Temple on January 3rd 2008. Lori enjoyed cross country skiing, cycling, running, and spending time with her family and friends. She loved cruising and traveling the world which she was able to do for family vacations and responsibilities related to her job. She is survived by her husband, Gordon Smith; her 4 daughters: Jennifer Redford (Brett) Nielsen, Nicole Redford Pierce, Britni Smith (Tim) Ponce, and Breanna Smith (Caden) Patey; her step-daughters: Shanelle Smith, Karras Smith (Jordan) Vanderlinden and Candice Smith. Her grandchildren: Kyla, Mitt, Talmage and Atticus Nielsen, James, Thomas and David Pierce; and Leland, Addison and Andrew Ponce. She also leaves behind her parents: Gilbert (Cathy) Wright, and Susan McLaughlin (Don) Beus, and her inlaws; Sherman and Gwen Smith, along with her siblings: Donald Wright, Debbie Wright (Larry) Lires, Lisa Beus (Rod) Hakes, Thomas Mitchell, and Amy Wright (Nigel) Hathaway; Her extended in-law siblings and her many aunts, uncles and cousins. A viewing will be held from 10:00 AM to 12:30 PM at the Spanish Fork 9th Ward Chapel located at 900 Del Monte Road. The funeral service will follow at the same location at 1:00 PM. The interment will take place at the Spanish Fork Cemetery immediately following the funeral service.

Laura (Lori) Ann Wright Smith passed away peacefully at home following a 3 year battle with ovarian cancer, surrounded by her loving family on September 7, 2018. She was born in Campbell, California on July 2, 1964 and was the third child born... View Obituary & Service Information

The family of Laura (Lori) Ann Wright Smith created this Life Tributes page to make it easy to share your memories.