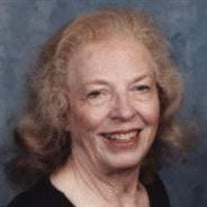 Laurel Lorraine Carver March 11, 1930 - January 13, 2015 Lorraine was born to Neils Jacobsen and Ione Jacobsen (née Marchant) in Burley, Idaho. Her family moved to Southern California when she was a child and she grew up in Long Beach. After graduating from high school, she met and married Oscar (OC) Carver in 1950. They had five children, Barbara Lynne, Michael Lee, Kathleen Diane, Susan Lisa, and John Adam. Shortly after marriage, her husband gave her a Cocker Spaniel puppy to keep her company while he was away in the military. That began her lifelong of raising and showing dogs. She began showing Cocker Spaniels but eventually became a licensed all-breed handler. In the 1980’s, Lorraine began working with Portuguese Water Dogs. She became well-known and well-respected among Portuguese Water Dog enthusiasts and the PWD Club of America. Preceded in death by her husband and their eldest daughter, Lorraine is survived by four of her five children: Michael Carver, Mrs. David Walser (Kathy), Mrs. Timothy Hubbart (Lisa), and John Carver. She is also survived by 16 grandchildren and 15 great-grandchildren, including two on the way. Lorraine will be remembered for her sense of humor, her tenacity, her bright smile, her beautiful long nails, and the 51 flavors of ice cream in her freezer. She had an amazing memory and remained physically and mentally active until her first stroke in 2010. Funeral services will be held at The Church of Jesus Christ of Latter-day Saints meeting house at 2801 W. 620 N., Provo, UT 84601, with viewing at 9:00AM and funeral service at 10:00AM. Interment will be at the Orem City Cemetery.

Laurel Lorraine Carver March 11, 1930 - January 13, 2015 Lorraine was born to Neils Jacobsen and Ione Jacobsen (ne&#769;e Marchant) in Burley, Idaho. Her family moved to Southern California when she was a child and she grew up in Long Beach.... View Obituary & Service Information

The family of Laurel Lorraine Carver created this Life Tributes page to make it easy to share your memories.